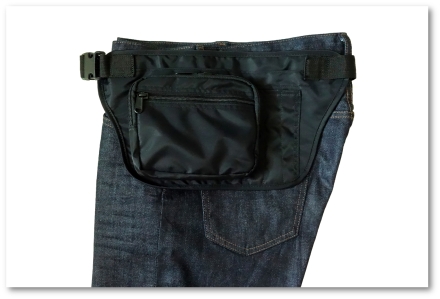 Despite its many reiterations, the bumbag has never really caught on here. Its association with the un-cool and the money bags of wet market stall-keepers gives the bumbag an undeservingly poor standing. If they’re used by fashionable individuals (and they are), the bumbag has become a bit of a misnomer since they’re worn as a cross-body bag, strapped closely to the back, a practice made popular by the Japanese in the ’90s. The move of the bumbag—also known by the unattractive name fanny pack—to the back of the upper body gives it a certain rugged appeal not unlike the messenger bag. The posterior has lost a companion.

This is why Muji’s compact version is appealing to us since it is clearly not designed to have the flexibility of a bumbag that can play the messenger cousin. Calling a spade a spade, Muji named its version the Nylon Waist Bag, and it can sit, to appropriate Madonna’s current favourite word, unapologetically on where one would normally strap down a belt. An additional bonus is the slimness, flatness, and compactness of the bag: it hugs your hip so snugly that you do not feel you’re carrying anything extra with you. This is especially useful when you need to be unencumbered by a bag (there are many instances when freedom of the hands is very much appreciated), and yet you have smartphone, eyewear, and whatever else you are so inclined to bring along. Modern life, as you know, doesn’t allow you to be free as a bird.

In addition, for something that can be worn so closely to the body, we were quite amazed to find in it a total of four pockets and three slots for pens or masculine accoutrements such as torchlight or screwdriver. The front pouch-pocket sits in front of a rear slip-pocket that is barely discernible, perfect for securing cash and credit cards. As it follows the contours of the lower body so closely, the bag is no hindrance to whatever the wearer does. Functionality rarely looks and feels this good.