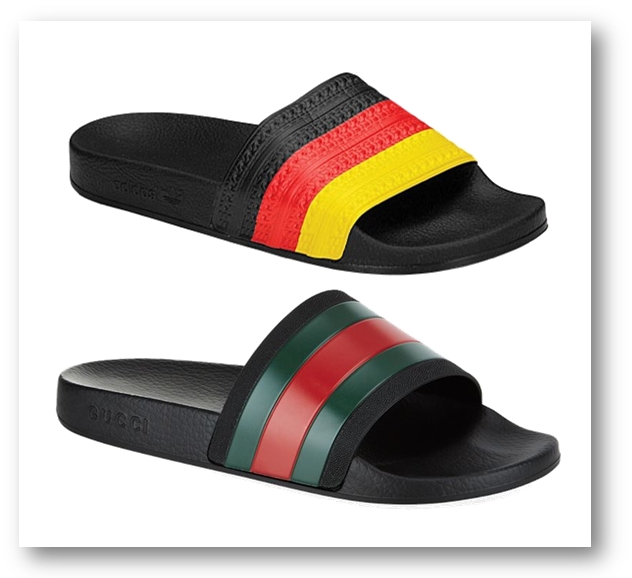 Which came first? That shouldn’t be hard to guess, but for those whose retro-sense goes only as far back as 1990, when Tom Ford was installed as Gucci’s creative director, then it may require stating that the slippers seen here—now known as slide sandals, pool sliders, or simply slides—first appeared in 1972, when Adidas introduced the ‘Adilette’. Back then, these were thought to be for use in the bathroom or, worse, a descendant of the cha kiak—wooden clogs from a bygone era—that mothers gladly pointed out. Yet, there was something so anti-establishment about them, an alluring counterpoint to the favoured flip-flops of the time, that they caused a mini craze.

Gucci’s, as far as we can remember, appeared in June last year, when they released a white version of the one above. The fact that this style is called ‘Pursuit ’72 Slide’ suggests that Gucci is not even thinly veiling its homage to the Adilette. Just look at the placement of the brand name! In their compositions, these made-in-Italy slippers are not so different from Adidas’s made-in-China ones. Even Gucci’s upper is synthetic, rather than leather. But with Gucci’s distinctive coloured bands—red-and-green—that are inspired by saddle girths of horseback riding, these should have as much prestige as anything with their repeated interlocking Gs.

There’s no denying that luxury brands are increasingly taking their cues from athletic brands, specifically where footwear is concerned. Gucci, in this instance, does not only want to dress your feet for the office or for a date, they, too, want your soles atop their sliders so that you don’t need to go pick your free copy of Today in generic flip-flops. Desiring to cover all categories of footwear is understandable since a business will find all means to grow, but the need for luxury brands to ape the product offering of sports brands is curious. You won’t find Adidas doing leather horse-bit loafers to capture the hearts of fashionable urbanites. Sure, they have their Princetown loafers, as well as those colourful penny loafers conceived in collaboration with Jeremy Scott, but these have a sports aspect to them. Or in more marketable parlance, they’re hybrids.

In Gucci’s heydays, many of their products, from bags to shoes, set the trend, and were much looked at by lower-market brands for inspiration. These days, the reverse is too noticeable to ignore. The bubble up effect is truly effervescent.

4 thoughts on “Two Of A Kind: Pool Sliders Face-Off”