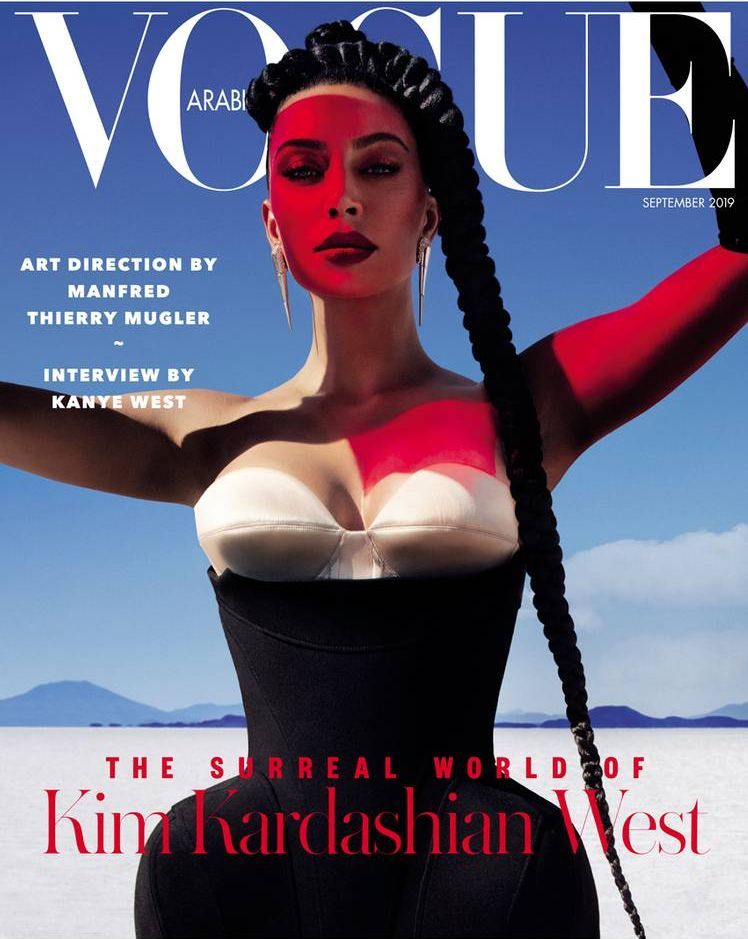 We are not fans of Kim Kadashian as a model. Not as a reality star, nor a fashion icon. We are moderately amused by her as a shape wear designer and slightly more fascinated by her as prolific IG influencer. As a model, she’s mostly stiff, one-dimensional, and communicates little sartorially since what she usually puts on can hardly be called wear or, if she does, is something so skin-hugging that our imagination is never taxed.

Yet, she’s not only a model, she is, according to editors (and quite a few of them), cover material. From her feeble first—Complex (February, 2007)—to the borderline bridal bashful—US Vogue (April, 2014)—to the one that “broke the Internet” and consequently became a “cultural phenomenon”—Paper (Winter, 2014), Ms Kardashian is unfazed by the equally positive and negative effects she has on people who buy and read magazines. It is rather curious that despite her status as a social-media star, Ms Kardashian is rather besotted with old media and ever-ready to pose for print.

And now, a title associated with a hyper-conservative society that only very recently allowed women to drive and to travel abroad without consent from a male “guardian”. That Ms Kardashian is given the go-ahead to bare shoulders, arms, and cleavage is perhaps indication of creative output on her terms, rather than expression to test societal limits. Perhaps, to her, this is one way to encourage and empower the women of Saudi Arabia. Or, a chance to sell her “solutionwear”, now called Skims after the first disastrous naming exercise.

It is not unreasonable to assume that the cover girl wore Skims beneath the exaggeratedly shaped and fitted dress (with hips that could have been the result of a modest pannier), which is a vintage ensemble by the former designer Thierry Mugler, whose unnaturally enhanced silhouette was his trademark, an ’80s success story, and now the obsession of pop stars, such as Beyonce, who must wear his designs even when he no longer makes clothes, at least not commercially.

Shot by Spanish photographer Txema Yeste, this is, to us, Kim Kardashian’s strongest, fashion-savvy cover and the September issue cover to beat, but we are not inclined to give the credit entirely to her. The cover blurb also cites the contribution of Mr Mugler as art director (and Kanye West as interviewer of subject, but the husband is not the focus of this post). While the Frenchman’s eponymous line was still under his watch, Mr Mugler was known to have personally conceived the images that defined his sense of ultra-femininity, as well as the concepts of his wildly entertaining fashion shows in the ’80s.

Now a cabaret impresario, Mr Mugler continues to have full control of the images he creates, his own and those of the people he works with, as well as the projects that are under his conception and direction. His clothes might have appeared to be maximal (Harley Davidson corset!!! Millennials may remember Beyonce in it, but back in the ’90s, in that supermodel music video, George Michael’s Too Funky, model Emma Wiklund wore it alongside others in more clothes designed by Mr Mugler, who also directed the film), but the visuals have always veered towards minimal—even futuristic—to better underscore his designs’ sculptural, almost architectural quality.

Ms Kardashian’s covers have always leaned on the side of the commercial. Her rise from reality television is ascent from a commercial medium. Her later and current proclivities for nudity teeter on the pornographic, and nothing is more commercial than porn. The Vogue Arabia—not even two years old— cover is, conversely, a treatise on fashion as artistic expression that can be spared sexual overtones. The well thought-out composition of bi-coloured dress against a not-overwhelming desert that is roofed by a sheltering blue sky, as well as the red patina across the model’s face and left arm is evocative of Mark Rothko’s colour blocking, even if not at all painterly.

For Kim Kardashian, this is possibly the closest to art. 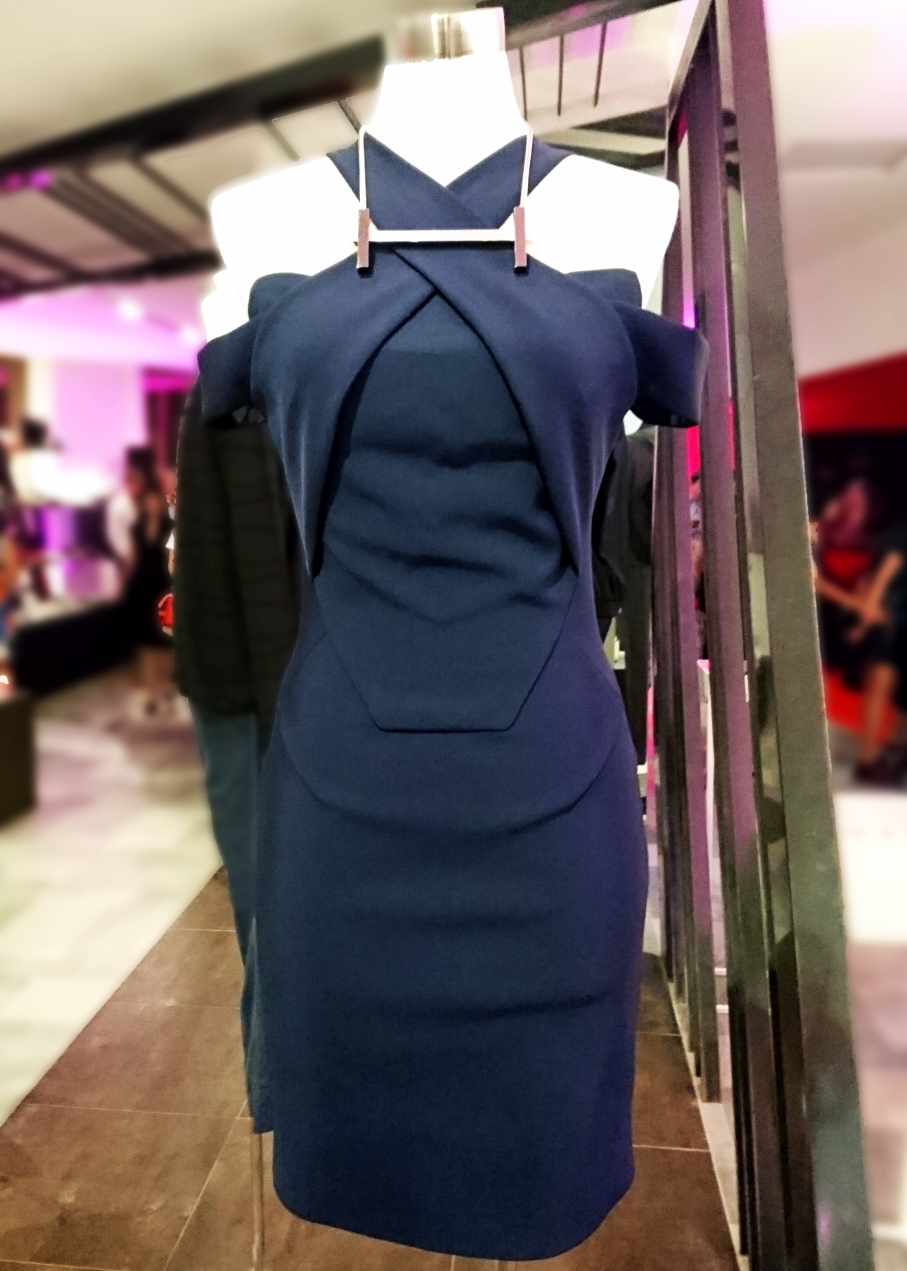 Thierry Mugler is so very much of the past that even with the Thierry dropped from the brand—as well as a newly designed logo (no more lightning-bolt signature), you wonder if what you’ll confront is the aggressive “glamazon” that once characterised the designer’s work when you come face to face with the clothes.

At the launch of the Mugler fragrance Angel Muse last Thursday at Manifesto, five styles of Mugler outfits from the spring/summer 2016 season were on display to the endless fascination of those who still remember what Mr Mugler once did and the indifference of those who really do not bother with brands that are not trending.

What’s really alluring to us is this two-tone navy wool-blend dress, no doubt an object of desire for the body-con brigade. If you look carefully, there are three neck/shoulder components that are adored by women for whom the concealment of shoulder and décolletage is totally aberrant to good taste. You can imagine seeing this outfit in the queue to get into 1-Altitude.

In just one dress, cut to love the body, there is the crisscross halter neck and off-shoulder sleeves that together offer cold shoulders! There’s also the bib-front bustier of the quadrilateral bodice, unexpectedly positioned beneath the halter top so that the cleavage is conspicuously blocked. To a psychiatrist, this dress may be suffering from a dissociative disorder, but to women who love to face the world radiating overt sexuality, this dress has only one personality: sex bomb.

Designer David Koma has, in some ways, kept to Thierry Mugler’s love of emphasising bust, waist, hip, and derriere, but he’s made it more in keeping with the Kardashian aesthetics. The shape of the back of the dress, for instance, is expertly controlled by clever seam work and dart placement so that the curves of the wearer’s rear side will not be down played. There’s technical savvy here that recalls Azzedine Alaïa.

Thierry Mugler’s aggressive glamour (some call it “fetishist-looking”) of the ’80s and ’90s that celebrated the hour-glass body, while not a massive commercial success, was very much lauded for its daring. In 1997, the company was sold to the French cosmetic firm Clarins, and in 2003, the fashion line was closed and discontinued before the rebirth in 2010 under the stewardship of Nicola Formichetti. The Mugler name became largely a fragrance entity.

In the spring 2008 Costume Institute show Superheroes, one of his outfits, a 1992 bustier with motorcycle handle bars spread atop the bust and stretching past the shoulder enthused and aroused Beyoncé so much that she coaxed Thierry Mugler out of retirement to designed the costumes for her 2009 world tour. For some women, Mugler still offers a wet dream of a dress.