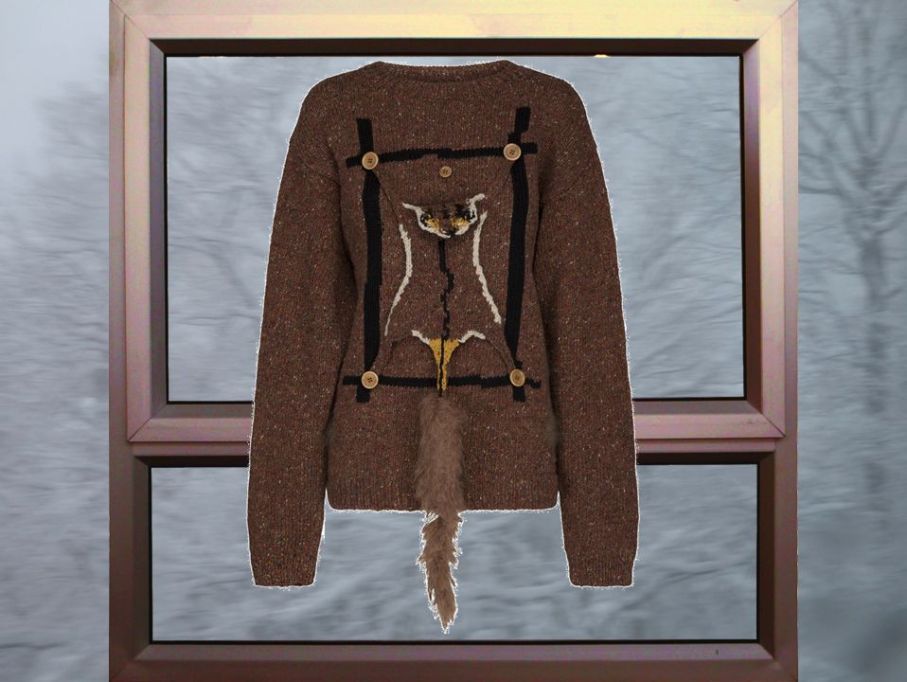 Pack a sweater and chances are you’ll have a neat little navy cashmere jumper ready for your suitcase. But sometimes you don’t wish to bring along something this vanilla, this expected, this easy to blend in. This is when you need a sweater with a flattened squirrel on it. And a tail that will wag around your crotch!

Whether this is clever/cheeky humour, it’s really up to you. But Dutch brand Survival of the Fashionest isn’t one to take design too seriously, without, at least, having fun with it. This sweater, for example, while not exactly Hello Kitty-cute, brings a smile to your face, even in the dreariest of winter weather.

In merino wool (which means it won’t be cashmere-plush), this crew-neck pullover has four buttons stitched to the bodice on which a helpless-looking same-wool squirrel is stretched out on all four limbs, and held in place by said buttons. Animal lovers may have a problem with what this may imply, but thankfully the pancaked squirrel can be removed if you find yourself in sensitive company.

Survival of the Fashionest was just founded last year by Dutch designer Joost Jansen. And already the brand’s stocked in Dover Street Market. A former design assistant at Walter Von Bereindonck and a production and research manager with Henrik Vibskov (whose e-shop stocks Survival of the Fashionest), Mr Jansen is a product designer by training, having graduated from the Design Academy of Eindhoven, The Netherlands. Despite cutting his teeth at the Bereindonck studio, Mr Jansen’s designs are not weird to the point of unwearable and yet quirky enough to give the wearer both street and fashion cred, contrary as that may be. Winter wear really should be this fun.