Marni in New York is not quite the Marni we’re used to. And there is that strange gaping aperture

Marni has been, for quite a while, dancing in the realm of the weird. The brand isn’t, of course, known for being typical, but looking downright freaky (probably funky to some) is rather the domain of Francesco Risso. This season, he’s moved the RTW show to New York and shown it below the Manhattan Bridge on the Brooklyn end, in the Dumbo neighbourhood. The under location aside, the clothes look positively under too—as in underclothes, not that that’s extraordinary. Perhaps it is not surprising that Mr Risso decides to show the spring/summer 2023 collection in New York, home of the Black Tape Project, in which designer Joel Alvarez uses not cloth to dress the body, but strips of adhesive. Sure, Mr Risso employs a more traditional way of dress making, but the scantiness is hard not to notice.

Or, the curious circular opening on the chests of knitted (mostly cropped) tops, repeated 19 times, out of the 58 looks that were shown. That’s one-third of the collection. Is that sufficient to constitute an emphasis? Or, a motif? This may sound crude (or, to eager censors, indecent), but they look vulval to us. It doesn’t help that most of the openings are framed by a ring of red, also hinting at something that could be labial. Mr Risso has not explained what he is suggesting, or what the wide, ringed aperture could mean that is not sexual. Could it be a mouth, sliced squid, the rim of a basketball hoop? Or, the fearful eye of Sauron?

There are other holes too. A squarish one appears on the front of a tank top. Others look like they are the result of unconventional tweaks in knitting machines. Filled holes are there too. Full moons (in some cultures, they are fertility symbols!) sit on the torso, with the upper portion stretched across the bust. When the models walk, the rounds look like pursed, moving lips. The sexiness is further augmented by the slinkiness of the clothes. Short and long shifts have no sides from the waist up, exposing more than side boobs. A long skirt, slit in the middle to up there, has a bifurcated hemline that becomes gloves/sleeves that reach the biceps. Even Mariacarla Boscono, in a red, leather, similarly slit dress, looks ravished, rather than ravishing.

The theme of the show, we would later learn, is “sunset” (under a bridge?). The dusty colours appear to suggest those that do not scintillate at sundown. They seem to mimick the hues of riverside festival seasons in Varanasi: earthy and primal. Mr Risso told the press that “a sunset is someone else’s sunrise… a physical phenomenon that sets fire to the sky”. It sounds like he was not describing riparian spiritual festivities, but some rave, when the goers eventually emerge into daylight after a night of expressive physical indulgence. A sunrise, conversely, could be someone else’s sunset. These garments are party clothes to better suit bodies that do not wish to be encumbered. Moreover, skimpy goes hand in hand with how Americans speak (or text) these days—for example, outfit, one syllable too many, is now reduced to “fit”. Is it a wonder that, over there, they are just wearing less and less. Francesco Risso certainly gets it. 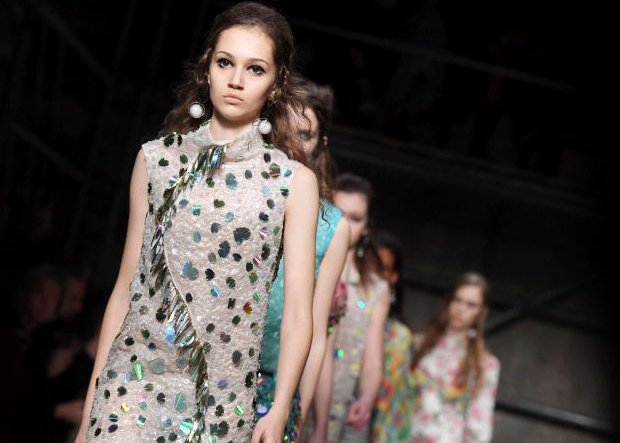 We once thought that Marni was the new Prada. That was in the mid ’90s, when Sex and the City apparently captured the zeitgeist. In that TV series, Prada was name-checked 14 times, just twice less than Manolo Blahnik (a respectable 16). So desirable was Prada at that time that we had hoped more labels with that familiar-yet-so-different-and-offbeat aesthetic would emerge and we found it in Marni, a brand forever associated with the art gallerist (as if only women ran art galleries, as if those who do mostly have a kooky sense of taste) and the art crowd.

Now, about twenty years later, we think Prada has possessed Marni. Francesco Risso, the guy who succeeded the brand Consuelo Castiglioni founded with her husband in 1994 has re-imagined Marni with the ghost of Prada, where he spent close to ten years, after time with Anna Molinari and Alessandro Dell’Acqua. Or maybe it was just us. Apparitions are difficult to make certain. Sometimes, you just sense it: a coat here, a skirt there, a touch of scarf, bits of fur.

It was like Prada on a lull season. Not that that is a bad thing. One can never immediately and completely shake off one’s just-past near-decade. So for Mr Risso to bring along the not-quite-ordinary from his last employment to a house known for its alternative take on what constitutes modern elegance is possibly a good start for continuing the Marni brand of creative defiance. This first collection is interesting (even when we are generally reluctant to use that vague term) and will not alienate Marni fans, but we did feel that there was too conscious an effort in respecting the house codes.

Take some of the jackets, for example, specifically the one from the first look, in the colour of butter. Yes, the Marni shape was there, but the sort-of-cocoon back, while appealing, was a wee bit too deliberate. The back design was repeated, and slowly, the Marni boxiness emerged and stayed. We love the typical boxy cut of the Marni jacket, so naturally we were delighted that Mr Risso has opted to retain it. Of course, Prada is known for their sometimes boxy shapes as well. In that respect, it was perhaps synergy at work. Or was it just the apparition?

By the time the prints and the mix of prints emerged, we found ourselves tugging at being convinced. Or could it be that, by now, odd pairings of patterns no longer fascinate? We can’t say for sure, but there’s something not quite art-crowd about Mr Risso’s prints and there is no surprise in the mix, not even when you run a length of decorative lace meandering down the skirt. Or the textures: what looked like terry with semi-shine leather (or PU, we can’t tell) just did not spell luxe. When look 45 (49 looks in total) appeared, the crazy cocktail of a floral funnel-neck blouse worn under a floral bra and matching outer and paired with a dotted skirt with drawstrings to create ruching, we had to commit the Marni we remember to the deeper recesses of nostalgia.

It’s not really been out in the open why Consuelo Castiglioni chose to step down. Rumours in fashion are always rife, and this one involves the brand’s owner Only The Brave (OTB), an Italian group that also controls Viktor & Rolf and Margiela. Could she have regretted selling it to OTB’s Renzo Rosso, who, according to W Magazine, is “a flamboyant paterfamilias, who prefers provocation to political correctness”? We hope that Francesco Risso would be able to stand himself in good stead so that Consuelo Castiglioni would not need to make a comeback a la Jil Sander. And then disappear again.