We weren’t going to talk about Henry Golding. Afterall, that movie he’s in has been receiving so much publicity that jelak won’t be adequate to describe the aftertaste. But now that even Vanessa Friedman mentioned “getting to sit across the runway from Henry Golding” at the Tom Ford show during New York Fashion Week, as if she was right in front of the most powerful sultan in the world, maybe we should also join the hulabaloo.

Here, in crazy rich (SE) Asia, the Malaysian media was quick to bask in the first-time actor’s glory of a front-row appearance, with the New Straits Times inferring that the seating arrangement is a “badge of honour” and, since Mr Golding was also placed next to Anna Wintour, “a coveted spot”. The man of that moment was also to the immediate right of Cardi B and a handshake away from Tom Hanks and his wife Rita Wilson. This is the stuff of national pride—Malaysia Boleh high, an achievement Jho Low, despite his Hollywood ties and international fame, have not been able to bring to the people of Malaysia. This is the recognition our own Pierre Png, not quite leading man material, will for now observe with shrouded envy.

That Henry Golding would be charming enough to secure Anna Wintour’s company at Tom Ford’s show is unsurprising. He has clearly won the approval of women who like their heterosexual leads with an affability that is decidedly old-fashioned, unforced, and, when imagined as boyfriend, easy to bring home to meet mom. And looking dapper in Tom Ford, which happens quite a lot for him these days, helps. So winsome he is that when he appeared on The View, all five hosts, including Whoopi Goldberg (who even took a photo with him off-stage, her arms around him!), betrayed their usual toughness to be captivated. 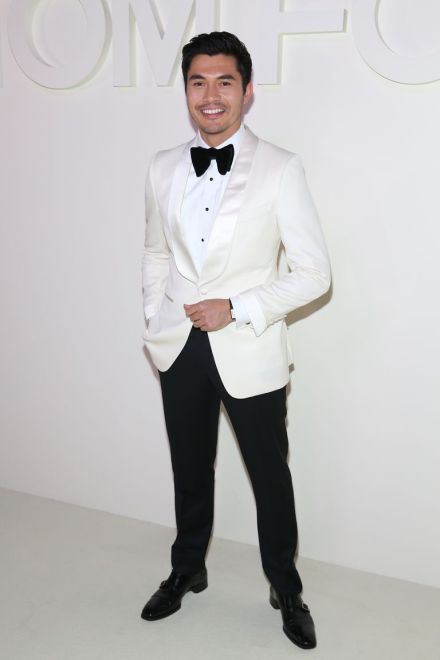 Mr Golding has been on Asian television quite a bit before his big movie break, mainly hosting travel documentaries. Especially compelling was Discovery Channel’s Surviving Borneo in which he completed the bejalai—an Iban tribal rite of passage into manhood, usually performed before marriage—in his mother’s homeland of East Malaysia. But it isn’t until now that people are identifying him by race, with the Malaysian media certain to precede his name or glowing nouns with the adjectival specificity of Iban-English(!)—Malaysian apparently not enough. With torso-baring scenes in the well-hyped film, girls are now adding “hottie” to the geographical affirmation, which may now elevate the home of Dayak head hunters to husband-hunting ground.

To Mr Golding, acting wasn’t answering a certain calling. In the UK of his formative years, he was a shampoo boy after secondary school and worked his way up as a hairdresser before landing a job at Richard Ward Hair & Metrospa, a swanky London salon near the Saatchi Gallery and within walking distance from the Sloane Square Tube station. It was after his return to Malaysia in 2008, when the now-ousted Dato’ Seri Najib Tun Abdul Razak was just a deputy prime minister, that he found himself as a presenter for travel shows on television, including the BBC’s, well, The Travel Show. His telegenic presence did not go unnoticed, and PR types and marketing heads keen to come before his comely face were inviting him to many social events, thus augmenting his celebrity status. To us, Henry Golding recalls another Eurasian: the British-Malaysian ethnobotanist James Wong, who, too, has a certain magnetism on television, and has made a name for himself through TV series such as Grow Your Own Drugs and Countryfile, both shown on the BBC.

Before his debut movie could even consider life as a DVD release in Poh Kim Video store, Mr Golding will soon appear in another movie A Simple Favour, opposite the inexplicable Vogue fave, Blake Lively. It is expected to be released globally next week. Whether this will see Malaysia’s favourite son become a movie sensation or a front-row regular, no one is placing a bet yet.