Mickey Mouse visits us on our 53rd birthday in 2018, and we put a hand towel on his head!

A friend of mine texted me yesterday to ask me to drop by Raffles City to look at “what they have done to Mickey”. “You have to see it,” he added for good measure. Since he put it that way, missing it might mean missing out! In case you don’t already know: like you, I suffer from a critical case of FOMO. So this afternoon, during my otherwise bo liao lunch break, I paid mi laoshu a visit.

What could you do to Mickey that Mini has not? It did not take long for me to see what my friend meant. There were many Mickey figurines, ninety to be exact, all painted/dressed/adorned differently. However, this is not quite like the painting of elephants (in 2011, our version of the Cow Parade) or other creatures that had previously gripped our nation and the celebrities who think they are artistic. This is desecration of a Disney icon. Unless you have a very wonky need to see the mouse Walt Disney drew become a Chingay charmer.

In a nutshell, Mickey is made to ‘Go Local’, very much like how it is for the APEC leaders’ Family Photo—as hackneyed but cheesier. This is a Disney and Raffles City partnership in conjunction with the shopping centre’s Art in the City program, which, this year, coincides with our nation’s 53rd birthday and Mickey’s 90th anniversary (on 18 Nov). Put art aside. Mickey is accorded the hospitality we’re known for: plunge the non-native in a vat of rojak. 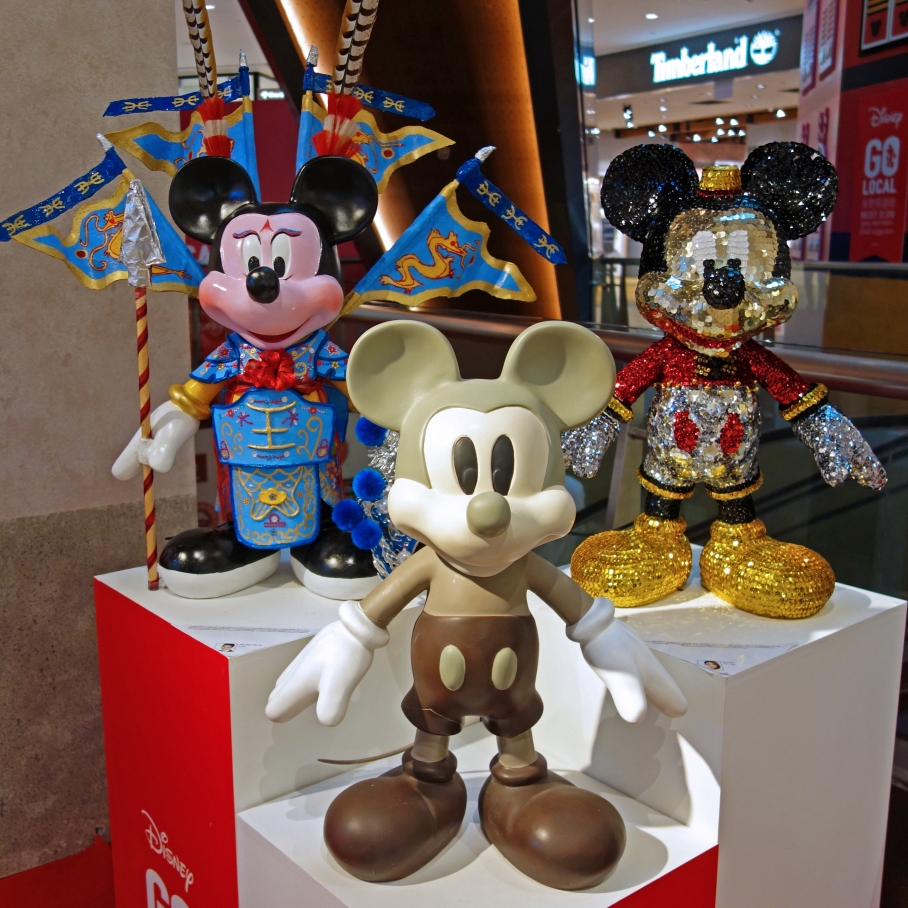 When we go local, we seem to think of cultural jumble or of the past. Nostalgia is big. It is as if most of the participants—Mediacorp stars, media types, and leaders of industry—had gone to the Naiise School of Art and Design and were taught by sentimentalist Jack Neo, aka Liang Ximei. We’re in our 53rd year of nationhood, yet we still see ourselves as emerging from the end of the Japanese Occupation. If it isn’t so, I don’t know why we desire to dress Mickey Mouse as a satay seller hawking on the street. And what’s with the obsession for the Good Morning towel?

I am unclear why Mickey Mouse is such a strong trigger for nostalgia. Could it be because he’s a cartoon character from another era, way before 4K televisions and digital transmission? A smart nation is what we’re aiming to be, yet Mickey going local in most of the 90 iterations appear to reflect a Singapore when the international airport was still in Paya Lebar and self-check-in was as fathomable as selfies. Interestingly and disappointingly, only one Mickey is depicted as a creature of a modern city: he is tattooed in digital motifs. 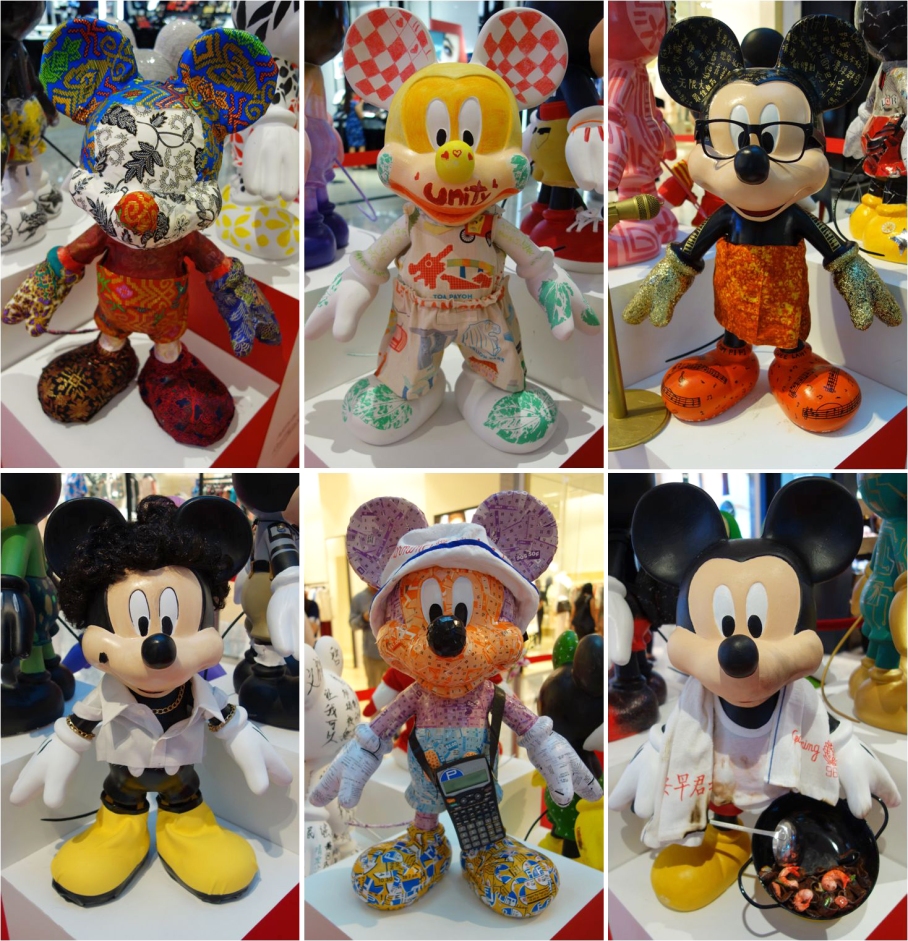 Unexpectedly, love for Peranakan culture and cuisine is barely palpable (3), same for the Merlion (1), the night races of the F1 Grand Prix (1), and, gasp, 4D/gambling (1). Halfway through, I was expecting Singapore Girl representation, but I guess that’s a tough one. It’s a lot easier to do Phua Chu Kang—he’s all of us: more for most, less for the rest. Dick Lee is missing too, although above me, they were playing Home.

And like the majority of us, fashion is not Mickey’s strong suit, and we know it. So we are not careful with the aesthetic abuse. If we don’t make him look kopi tiam-ready, we make him bloom like he’s dressed by Far East Flora. When the preferred garment by most of us is the T-shirt, only two Mickeys have one on. And when sneakers are the footwear of choice, only four of them are given some semblance of trainers. Intriguingly, a kind soul has given him a square of a tuala for his head because “with such hot weather in Singapore, he would need… a cute little towelette mimicking the Samsui women whose hard work helped shaped Singapore…” If there’s any imitating to do, I’d pick a certain Balmain-designed kebaya, but, as I remind myself, this is a family exhibition.

I am not sure how we’re going to impress visitors already not impressed by our fashion sense. Or convince them we have fashion on our mind. Maybe it’s just easy to localise Mickey. He has been wearing what seems to be only red shorts for almost all his life that no matter what you pile on him, it’s better than those trunks. I am not suggesting we send Mickey to Ho Ching’s samfu maker, but there must be an approach to dressing an overseas guest that does not involve the preference synonymous with Miss Singapore dressmakers: chap chai campur that’s tenaciously Singapura.

Mickey ‘Go Local’ is on at Raffles City, level 1 from today till 29 Aug. Photos: Zhao Xiangji