Some Malaysians dream of better-dressed leaders. One of them visualises them

Is it so bad to wish that some of our ministers and their spouses are better turned out in public, especially when representing the nation overseas? We wish, for example, that those Singaporeans who go to the White House be better-attired, but this kind of flair would appear to be a tall order. And, to make matters a tad complicated, spiffiness is not considered a political asset, and no one has yet offered a solution to the tendency for eye-raising frumpishness.

Over in Malaysia, an artist has dreamed up alternative looks for the country’s newly elected leaders in what was seen as the biggest election upset last month for the ruling party in the nation’s history. Malaysian politicians are not known to be sharp dressers, but that did not deter some to dare to hope. In a series posted on Instagram called “Minhipsters”, Malaysian artist/illustrator Aizat Paharodzi dreamed of the bridging of the political/generational divide by imagining what the current political champs would look like if they adopted something contemporary, or something with street cred.

Prime Minister Mahathir Mohamad, for example, was given a makeover that befits a middle-aged man, not a nonagenarian. Mr Paharodzi (or AP, as he is also known) dressed the good doctor in a palm-print Hawaiian shirt and a pair of slim-fit trousers cropped fashionably at the ankle—a sum of hipster heft that could have come under the auspices of Malaysian label Seed. He also added a pair of red Vans, as if in disapproval of the MYR11.99 Bata slides the “humble Tun” favours that had been trending agreeably among his ardent supporters. 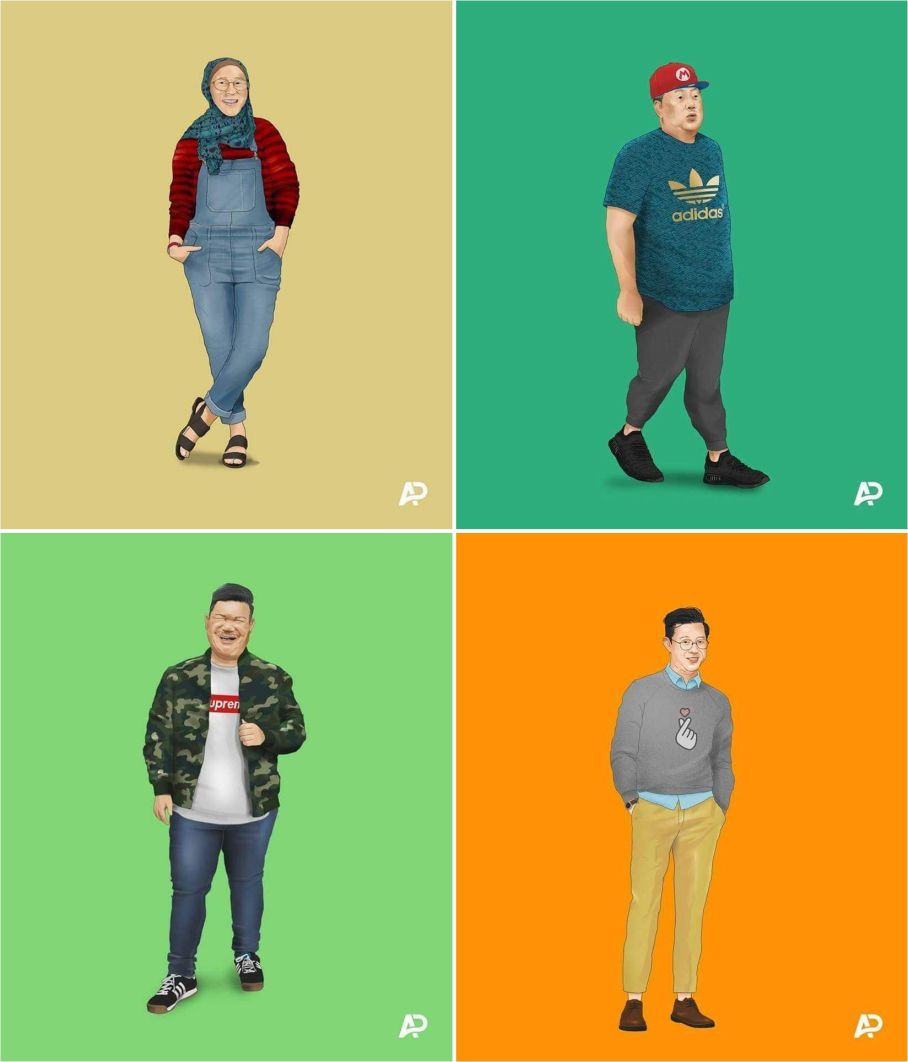 Mr Pahadrodzi’s drawings are, perhaps, a little derivative, but to be fair, he had declared that his work is inspired by Israeli illustrator Amit Shimoni. Unlike Mr Shimoni’s unabashed, in-your-face kitsch, Mr Pahadrodzi has played down flashiness and exaggeration while still catering to popular taste (that Supreme T-shirt on Mat Sabu!). His delineations are approachable and comprehensible, and project a genial disposition, all rather preferred political traits. While his choice of clothes for his subjects are not in the same league as Hong Kong illustrator John Woo’s depiction of Star Wars characters in designer threads (Ja Ja Binks, for example, in Maison Martin Margiela!), they may relate to a rakyat for whom better clothes are really just those that are neat and smart, and the occasional Adidas NMD.

Although our two lands are just divided by a causeway, our neighbour in the north seems a lot more progressive and expressive politically than we are. Sure, Netizens here have been vocal about how poorly some of our political players dress, but often times they are just trolling. For those not concerned with outward appearances, well-dressed is thought unseemly. To be certain, we’re not hoping for a Christine Lagarde or a Justin Trudeau in parliament so that their clothes can be trending, but we do hope some of our leaders can hold up sartorially, just as they do intellectually.

Many of us take pride in what our ministers have done for this tiny nation. That we can play host to the Trump-Kim summit this week attests to the clout, geostrategic smarts, and organisational flair of our top brass. Yet, we seem unwilling to see a stylish political class. Wishing for better dressed politicians seems to be the most unlikely desire we can harbour for our governmental make-up, or the least condoned. But optics matter, and when the West—Americans in particular—still think Singapore is part of China or, funnily, Malaysia, perhaps the way we dress in the company of those who will mistake our provenance should be a priority, not an afterthought.