At tomorrow’s Singapore Fashion Awards (SFA), the nominees of Designer of the Year Danelle Woo of Aijek, Chelsea Scott-Blackhall of Dzojchen, and Yong Siyuan and Jessica Lee of Nuboaix are vying for the recognition with traits, skills, and flair that vary immensely on the scale.

Ms Woo’s Aijek, while a commercial hit, is far from design-driven; it speaks less of the designer’s gift than a market keen on the non-challenging; i.e. ultra-feminine styles that are often described as “effortless” to a superlative degree. An “everyday woman”, as Ms Woo describes herself to the media, she has conceived Aijek to “create something that was a middle ground”. Intermediate positions do not often win awards.

Ms Blackhall’s co-ed brand Dzojchen (pronounced, as advised, “doh-jen”) has the sleekness of a fashion-aware easy-to-wear line, with the male-leaning aesthetic of the women’s collection seemingly built on Freudian ideas. Working in Ms Blackhall’s favour is how the compliment ‘cool’ is often associated with her, how the social aspect of her life is just as cool, and how numerous the cool girls, such as fellow ex-model and ardent supporter Rebecca Tan, she hangs out with are. Chelsea Scott-Blackhall, by cool alone, has many rooting for her to win the Designer of the Year. And she is likely to.

Nuboaix is a lot quieter as a brand, significantly quieter, so much so that one veteran designer was miffed that he had not heard of them prior to the nomination. “Designers must know how to market themselves,” he had exhorted. “You can’t just sit by yourself in the studio and not connect with the outside world.” The designers of Nuboaix were unknown to the judges of SFA, too, until their names were offered when the pre-judging had, again, arrived at the edge of a small and shallow pool of talents. If a fashion brand’s award-worthiness is invariably linked to its designer’s social standing, then Yong Siyuan and Jessica Lee would be less accepted of what they have wrought since they are virtually unheard of. 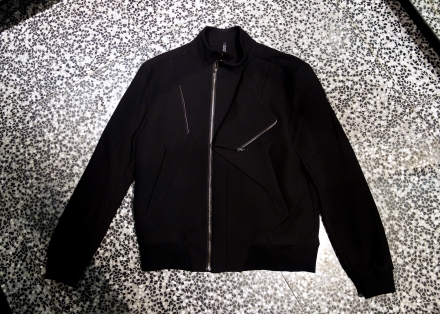 A signature Nuboaix blouson with a cross-chest flap

Why should unknowns be awarded? Because these two not social-by-nature or social-for-reach unknowns have dedicated their lives to their craft, and spent many hours in their Northstar@Ang Mo Kio studio, patterning, perfecting, cutting, fitting, and sewing. Yes, sewing. From the brand’s first season until the current, every piece in the collections—15 seasons so far—has been stitched by both Yong Siyuan and Jessica Lee, partners in business and in life. And every trim affixed by the two. Their studio, no bigger than the master bedroom of a HDB flat, doubles as production facility. Nothing is farmed out. In addition, and more importantly, because both designers have a clear, distinct, original voice.

Few designers think about DNA, let alone a signature than can immediately identify their brand. Mr Yong and Ms Lee do, and their approach is so un-tethered to palpable signals in men’s wear—especially the current obsession with volume, as well as streetwear—that their designs are oftentimes headwinds pushing against the currents of what is considered fashionably masculine. For sure, they do not design for those who populate the Singapore Exchange, yet it would be imprecise to say that they design for those who prefer a strictly casual mode of dress, such as that unconsciously adopted by photographers’ assistants. These are clothes for guys who care about how they look, be it at work or at play, and how judiciously employed details in garments can set them apart. And smartly too.

And it is in the details that fans of the brand are raving about. A Web content developer, who has been buying NBX for more than a year, said that “the clothes are unlike anything seen even in more edgy men’s wear collections such as those at L’Amoire. I like the pieces joined to form shapes on the garment—they look like configurations on a computer chip!” The Nuboaix signatures are, in fact, more than their much admired insets in which assorted geometric parts (sometimes including a functional pocket), often arranged diagonally, convene rather happily. As Ms Lee, “in charge of all communications”, elaborated to SOTD: “Our double rivets affixed on the left of the neck, as seen on our knitwear, serve as one of our signatures. Another would be our cut-and-sew details worked on our T-shirts in the form of a simple single, left-chest pocket. Not forgetting the cross-chest flap, on our bomber jackets, which has become a staple since S/S 2017. Our designs are discernibly NBX and we like it that way. One will not mistake our brand for another, or vice versa.”

What they can achieve is more remarkable considering the oft-cited resource scarcity designers here face. “To name a few,” Ms Lee shared, “fabric selection is severely limited; zippers are very standard, with no variations on teeth size/color/material, etc. Good sewers are scarce too. There isn’t existing textile technology either, which means there is a limit to how much we can achieve. We simply do not have access to a more sophisticated manufacturing industry.” Which explain why they keep almost all the work in-house even when the breadth and depth are tough to sustain. “Every day is hard work and not one process is a bed of roses. But this is the price to pay in order to maintain the quality of our products. The whole process, from conception to sewing to fitting, is too important to outsource.” 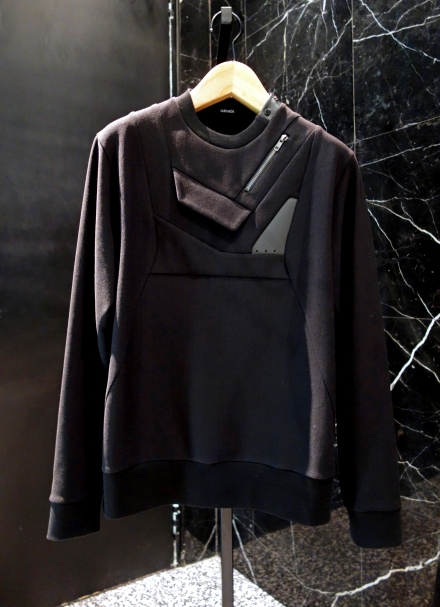 A Nuboaix pullover with signature bib-front composite of geometric shapes

Nuboaix was conceived in 2008—“the seed was planted” then—and incorporated as a company a year later. Both Ms Lee and Mr Yong had met as students in Nanyang Academy of Fine Arts’ School of Fashion Studies and graduated with a diploma in fashion design in 2004. Mr Yong would later return to the school to complete a BA degree in fashion marketing, a joint program with the UK’s Northumbria University. The name Nuboaix—vaguely Japanese or evocative of the world of Star Wars, which would not be inconsistent with their love of anime and science fiction—intrigues the uninitiated enough to think that it is a foreign brand. Ms Lee, somewhat self-deprecatingly, said, “Apologies as there is nothing exciting here.” When pressed further, she let on: “It’s just a made-up word from the name of a pet. Still, it’s a name that has come to resonate with the way we are steering the brand—with a more futuristic and forward feel.” The name sets the tone for the collections, and, as she noted, “the clothes remain subtle, almost clinical.”

According to Ms Lee, co-designing a collection was not initially on the cards. “Definitely not. LOL at that time. We were both very different in terms of design elements, direction, and thought process. Our idiosyncrasies define us both to be almost opposites, but, of course, along the way we learned to compromise and complement each other when working together.” The eventual harmony of the ying and the yang meant that, apart from being able to collaborate, both of them could arrive at a design consensus without disastrous skirmishes, and this is reflected in their output: a pleasing synergy that does not betray their gender differences.

The first NBX collection came together in 2010, at a time when start-ups in Singapore were slowly beginning to show signs of a possible boom. It was a women’s wear collection for the spring/summer 2011 season called Walküre, alluding to the valkyrie, or females figures of Norse mythology, who decide who can live, or die in battle, so dramatically retold in the Richard Wagner opera Die Walküre. Correspondingly, the designs eschewed obvious prettiness and clichéd delicateness for an aesthetic that could be Amazonian in a parallel universe. A highlight of the debut was the convertibility of some of the pieces, such as a pair of below-the-knee pants that could intriguingly be transformed into a mini-dress—the waistband morphs into a halter neck! The unusual tailoring with technically-challenging details that are now evident in the men’s wear took shape at that time, and, together with subsequent collections—including Macht (another German word, this time meaning ‘might’), seen at the now-defunct Audi Fashion Festival 2010’s trade event Blueprint and their contributions to Kimono Kollab­ in 2015—appealed to so many men’s wear buyers that suggestions started coming in that the two should consider a men’s line as well. 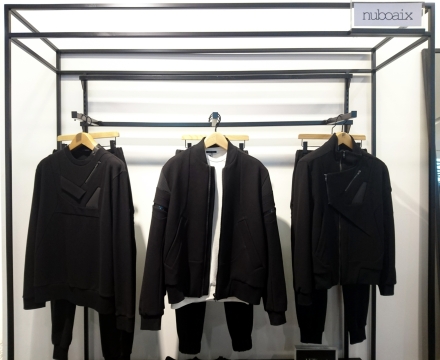 The transition to men’s wear came rather swiftly. Buoyed by encouragement from industry folks and precipitated by the competitive nature of the women’s wear market and what they thought were “a tad too forward” for the time, Nuboaix switched to men’s clothing in 2015, and quickly drew attention with their masterful patterning, especially for outerwear. That year, at a Paris trade fair, buyers from Robinsons visited their stand and was impressed enough by what they saw that Nuboaix was immediately offered space in the department store. Impressively, the brand’s merchandise was, from the start, sited among imported labels, and presently, Nuboaix has Andrea Pompilio and Marc Jacobs as immediate neighbours. If that does not adequately say something about the brand’s standing or quality or perceived value, perhaps pilferage does. According to an internal source, a Nuboaix piece was once shoplifted and the perpetrator, emboldened by the initial success, returned for a second attempt only to be caught red handed!

The immediate attraction of Nuboaix at one look is understandable. As one product development manager told SOTD, “Their things always look polished. Even with Marc Jacobs beside them, they don’t look like a shadow of the former. In fact, the clothes look expensive; they make Mark Jacobs look cheap.” From a design standpoint, “the concept is strong. Technically, it’s not easy to do what they do. Just look at how many pieces go into making just one top. And the final product is a balanced composition that has hanger appeal.” More importantly, regardless of the multiple cut-and-sew parts within the garment, which to the die-hard minimalists are superfluous, what emerges is something that any man can identify as clothes, not gimmickry with cloth.

In this respect, there’s something old-school in their approach. Although they continually experiment with new ideas and techniques; reconstructing and modernizing—uncommon for designers of their relative youth, they still kept to certain design approaches and details, and everything in their output is interrelated. As fashion has lost much of this sense of continuity, what Nuboaix has maintained harks back to older times, and is, ironically, refreshing. While this could result in formulaic designs, the proverbial complacency trap can be circumvented if Mr Yong and Ms Lee constantly reinvent themselves, or re-conceptualise the aesthetics of their brand.

With an SFA nomination and stockists in the US, Japan, Taiwan, and Saudi Arabia, it’s not unreasonable to assume that the two designers feel a sense of achievement, if not success. But Ms Lee’s reaction was more subdued. “We’re very humbled to be even nominated, so we’re not letting ourselves get ahead thinking about the results. It’s enough being recognized for the efforts, through these many years, put in to pursue a dream, a passion and to build a career in fashion.” She added, “Because we transited from women’s to men’s, we’ve kinda seen both worlds. Our understanding of the two probably sets us apart from the other designers. Again, looking at the NBX DNA that we’ve created, it’s uniquely ours. That’s our success.”

We noted that she had not once not used the pronoun ‘we’. Ms Lee and Mr Yong are engaged to be married. “People say one can never work with one’s partner. Sure, we have our moments, but after so many years being together and knowing each other inside out, we feel it boils down to splitting the work and apportioning to who’s better at what. It’ll take time to get there though.” And cheekily she added, “One mountain can’t have two tigers, right?”

Photos (except where indicated): Zhao Xiangji