Pepsi wants their cake and eat it too. Or, maybe, a can of soda and drink it too. In their latest commercial, they’ve engaged model du jour Kendall Jenner to do what Ms Jenner does: model. That is all rather swell until suddenly, in the commercial, she leaves her assignment at hand to join what appears to be a protest. That’s when things get a little iffy.

Encouraged by a passerby who communicates by tilting his head, she abandons what we assume to be paid assignment to join the action on the street. And why are they protesting? We don’t know. Anyway, Ms Jenner goes through a protesting crowd (inexplicably young and attractive), reaches the front line, and confronts a row of policemen. Instead of raising her hand in defiance, she singles out a handsome law enforcer and offers him a Pepsi. Peace, as it turns out, can be had in a can.

Social media blared with disapproval after the commercial was posted on Pepsi’s YouTube channel a day ago. Loudest was the charge that a “privileged, white” woman saving America from its civil-rights woes slights the real attempt to resolve race issues that plague the US. But is this really so startling—or new—when white America, on screen, has always saved the world, if not herself?

Pepsi pitches its latest commercial as a “global ad that reflects people from different walks of life coming together in a spirit of harmony.” And how “global” might that be? Or how “different”? Include an Asian cellist and a photographer in a hijab as key players among the throng of people with no anger or angst registered on their faces and you get diversity? If this is meant to reference recent confrontations, such as the Black Lives Matter protest in Baton Rouge, Lousiana, last year, how will a recognisable model who, according to Forbes, earned USD17 million last year (and continues to make more with this Pepsi commercial), diminish the anger that still simmers?

One of the earliest models to appear in a Pepsi ad was Cindy Crawford in 1992. In that version, she was all sex symbol, emerging from a vermilion sports car in the presence of two young boys who would become completely mesmerised by her sipping from a can of Pepsi. A sexy woman using her sex appeal to sell a product: that was it.

We’re now living in different times. A model’s beauty alone isn’t enough; she has to tell us that she’s socially aware and willing to go out there to take up a cause, even in the middle of a professional engagement, photographer and crew be damned. You see, the reality-TV-star-turn-model has a sense of right and wrong, and she can temper the tempest with an effervescent drink. 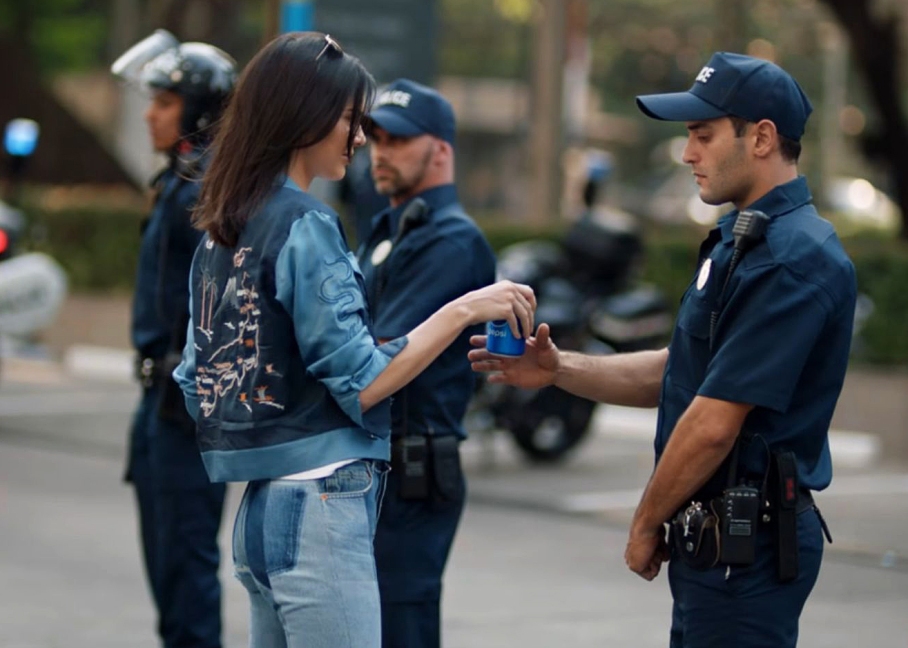 The Pepsi campaign may shout ‘Live for Now’ but its protagonist does not seize the moment since she, unlike the cellist and the photographer, has time to change out of her clothes to look like she could be a part of the crowd. When social justice calls, blond wig and Vamp-like lip colour are not protest material, nor metallic mini-dress, sheer duster coat, hoop-earrings, and black killer heels.

Suddenly she’s no longer a glamour puss; she’s a model who walks out of her work to follow a functioning conscience. That means joining the marching masses in nude make-up and in a cropped jacket, white T-shirt, and tri-tone denim jeans—an off-duty-model-pretending-to-be-an-ordinary-girl look that is completed by the perch of sunglasses on her head.

Like Diana Prince, she instantly changes from a fashion plate to a figure of justice. Only thing is, Kendall Jenner is no Wonder Woman. And Pepsi is no Coke—it can’t teach the world to sing, and definitely not in perfect harmony.

Update (6 April 2017): Pepsi has pulled this ad from circulation. It’s no longer available on its YouTube channel