And that is a good thing 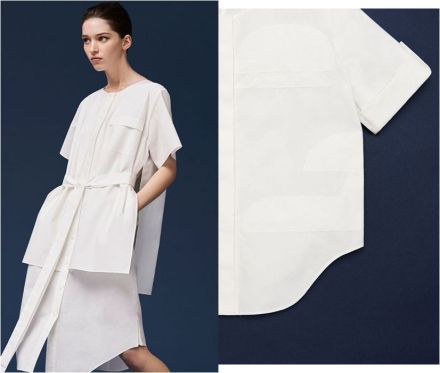 COS has never been big on selling the kind of clothes that makes you feel like Kim Kardashian or the women who walk too regularly at night outside Orchard Towers. And that’s one of the reasons why I am a fan. But more than that: COS offers clothes that do not make you look foolish. In this age of some very strange antics and bodily representation on Instagram, I do think appearing sensible is a boon to one’s sanity. But sensible does not have to be boring. This has nothing to do with normcore, if that icky word is still in use. COS has proven again and again that minimalism can be compelling. Minimalism need not be pigeonholed.

This is the 10th year of business for COS, and, since its inception in 2007, has been producing eminently wearable clothes that do not remain on the side of dull. As if proof is needed, they have just released (actually, yesterday) a limited-edition, 10-piece (five for men, three for women, one for boys, and one for girls) collection to celebrate their anniversary and it clearly illustrates the advantage of clean that is COS. Good design, it is often said, lets the cut and the fabric do the talking, and what voluble and vivid message this is.

As COS tells it in its eponymous magazine for spring/summer, “Every item… started life as a continuous rectangle of material. During an exacting design process, the space between individual pattern pieces was minimized, raising the bar for precision garments whose smart elements fit together like a puzzle.” Smart: everyone desirous of using smart gadgets in a smart city would appreciate that deceptively simple, but surely rigorous approach to design. I sure do. Okay, I am not speaking for all of you.

Appealing is the working with the one-dimensionality of fabrics, and using geometry to create something that can be worn on a clearly 3-D body. This would involve a highly-skilled patterning team, and the one at COS is. They would not shy away from toying with the space between the body and cloth, creating clothes that are not bashful of their roominess and boxiness. There is particular attention paid to symmetry so that every item has the beauty of balance. There’s also the play with lines, such as the curve on the side of the double hem of the men’s shirt-jacket. It takes after the curvature of the sleeve head, again underscoring the geometric interplay that is central to the design approach of this capsule.

COS has likened the silhouette and softness of the collection to Japanese clothes, especially the kimono. While it is true that body-contouring is less a design element in Asian dressmaking (the kimono, for example, is fashioned without taking into consideration the contours of the body) than it is in the European’s, but to me, the un-bandaged silhouette of COS is also synonymous with those of other lands, such as the Middle East—the ancient Israelites, for example, wore robes in the shape of the T, known as kĕthoneth, of which Joseph’s colourful one is possibly the most known, being central to the Biblical stories of the Old Testament.

The less-structured form that COS has adopted is in line with the hitherto somewhat discreet push for a more relaxed approach to dress that has rather Oriental overtones (but not, obviously, the bluster of Gucci). Proponents include Craig Green, Rick Owens, Nakamura Hiroki of Visvim, Hirata Toshikiyo and Kazuhiro of Kapital, and Alexandra Byrne, whose costume for the 2016 Marvel film Doctor Strange is no doubt inspired by the garb of kungfu masters of yore.

I’d be the first to admit that the minimalist style (and styling) of COS has its limits. Amid ceaseless online and offline visual stimulation and provocation, these clothes, though powerful in their purity, are just too impotent to arouse. Is this why at yesterday’s opening-day sale of COS 10 (as the capsule is referred to in the store), there was no queue, no rush, no rack-side mayhem? Or was it because this was a no-big-name effort? Quiet begets quiet, and, unsurprisingly, calm came to sit alongside the clothes.

COS ‘10-Piece Capsule’ is now available at COS, Ion Orchard. Photos: COS