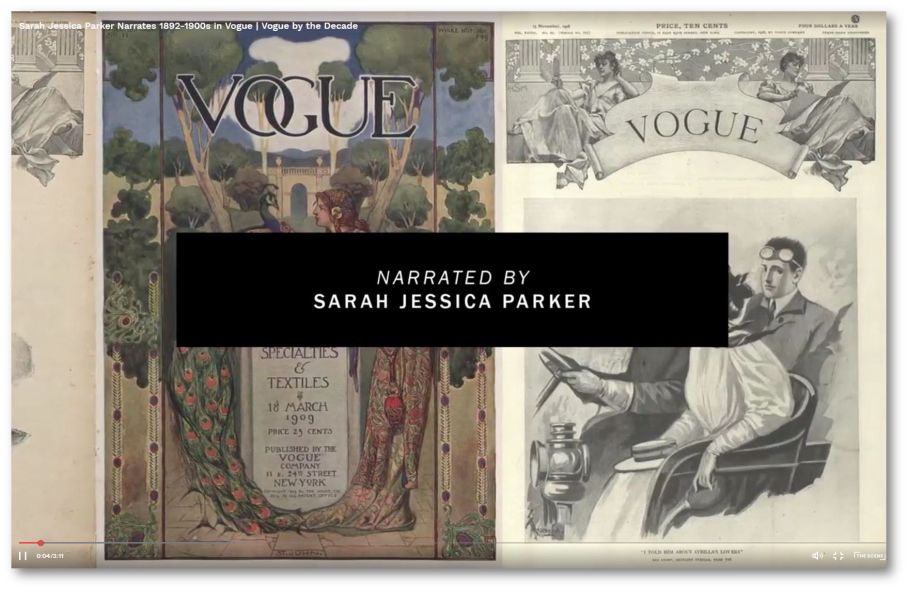 In season 4, episode 2 (also called ‘The Real Me’) of Sex and the City, Carrie Bradshaw said, “When I first moved to New York and I was totally broke, sometimes I would buy Vogue instead of dinner. I felt it fed me more.” Vogue was so much a part of Ms Bradshaw’s life that it had a cameo role in the six-season, 94-episode TV series; leading to an episode in season 4 called ‘A Vogue Idea’. It is unsurprising, therefore, that Carrie Bradshaw’s alter ego Sarah Jessica Parker was asked to narrate the e-series The History of Fashion in Vogue for the title’s online edition.

Vogue and Carrie Bradshaw were so intertwined that despite the shorts’ title credit that read “narrated by Sarah Jessica Parker”, the voice-over sure sounds like Ms Bradshaw. In the first of what Vogue calls “a series of ‘five points’ videos by decades”, SJP opened the peek into the late 1800s and the 1900s by saying “Start-up wasn’t part of the vocabulary of 1892, when Arthur Baldwin Turnure started a weekly journal of fashion and society called Vogue.” This could have been “Once upon a time, an English journalist came to New York…” of the debut of SATC, minus the close-up of the text appearing on the computer screen and the vibraphone tune of the main theme before that.

Sex and the City was very much a self-narrated account of Carrie Bradshaw’s New York life, which included three of her friends. The gossipy unfolding gave the series much of its authenticity and intimacy, and it made Carrie Bradshaw the protagonist so many rooted for, even when her neurosis and self-inflicted pain were sometimes too much to bear. That voice, that pitch, that urgency—all so identifiable as prelude to Sex and the City’s celebration of sex-as-you-wish liberty and blatant consumption that even on a program about the history of one of the world’s most recognisable publications you sense that maybe there’s going to be who slept with who after who bought what.

Thirty seconds into the first episode of Sarah Jessica Parker Narrates 1892-1900s in Vogue, SJP says that Vogue was a “journal of society, fashion, and the ceremonial side of life.” She may be referring to another era far removed from the one she’s in, but she could be describing the world of Carrie Bradshaw, minus the sexual escapades and tearful heartbreaks. When SJP revealed with such wonder that “crackerjack” Condé Nast purchased the publication in 1809, she could have been referring to Capote Duncan (the publishing executive who nearly bedded Charlotte York), or Mr Big.

These short videos were conceived to celebrate Vogue’s 125th year, but they’re not exactly a broad look at the past. In the face of debates over whether Vogue is relevant, they only serve to remind us that the magazine has come this far and will go further, much further.