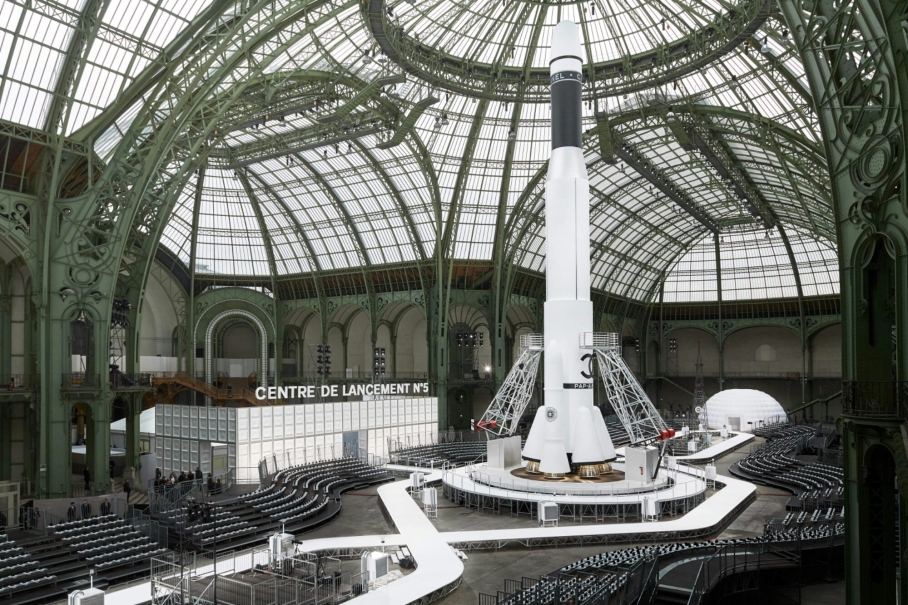 The 35m rocket stood in the middle of the Grand Palais like the Obelisk of Luxor at the centre of Place de la Concorde. Guests arriving to witness Chanel’s fall ready-to-wear presentation must have been wowed by the spacecraft as pilgrims in 1400 BCE visiting the Luxor Temple were when approaching the entrance’s twin obelisks (before they were split, with one arriving in Paris in 1833).

Karl Lagerfeld has been Chanel’s ringmaster since the brand’s fashion shows became more than just a catwalk event. He’s been dreaming up so many of these massive mind-boggling sets so that the audience would be awe-struck that it’s become hazy as the smoke from the Chanel-branded rocket when we recall the number of them. But remember we do: the carousel of fall 2008, the iceberg of fall 2010, the giant globe of fall 2013, the supermarket (or was it a hypermart?) of fall 2014, the boulevard of spring 2015, the brasserie of fall 2015, the casino of fall 2015 (couture), and the airport terminal of spring 2016 (which is the second air travel-related theme after the hangar of resort 2008).

And now, this rocket. “This is what you call one giant leap for mankind,” declared the online edition of Harper’s Bazaar. Really? Is Neil Armstrong turning in his grave? And for vogue.com, “the rocket ship was, of course, the pièce de résistance”. Then, what about the clothes?

Chanel makes garments that please, but they are not exceptional enough for the media to rave about or awful enough for detractors to hate. Bouclé or no bouclé, Mr Lagerfeld offers mostly variations of a theme. It’s what keeps Chanel alive. Even if Chanel omits shows from their image-making thrusts, women will still buy the handbags, camellia brooches, and earrings with the double Cs.

Despite the presence of the rocket, there was nothing space-age or galactic about the collection. If there’s not anything you can say about the clothes without sounding yet again like a deferential fan, then perhaps something can be said about the experience attending a Chanel show. They are smart. And an experience isn’t a mesmerising one if there was only a static ship. That’s why the lift-off during the finale, although, anti-climactically, the Chanel rocket did not shoot through the roof for the stars. But it was dramatic enough. The resultant oohs and ahhs washed over any potentially anaemic reaction to the clothes. For the attendees, this was probably the only rocket launch they’ll ever attend. And that’s good enough.

It’s been said that these big productions with their equally massive sets that could put any West End show to shame may boost a luxury brand’s top-of-the-pack standing. If so, what should we make of Balenciaga showing in a set-free basement? Balenciaga on a budget?