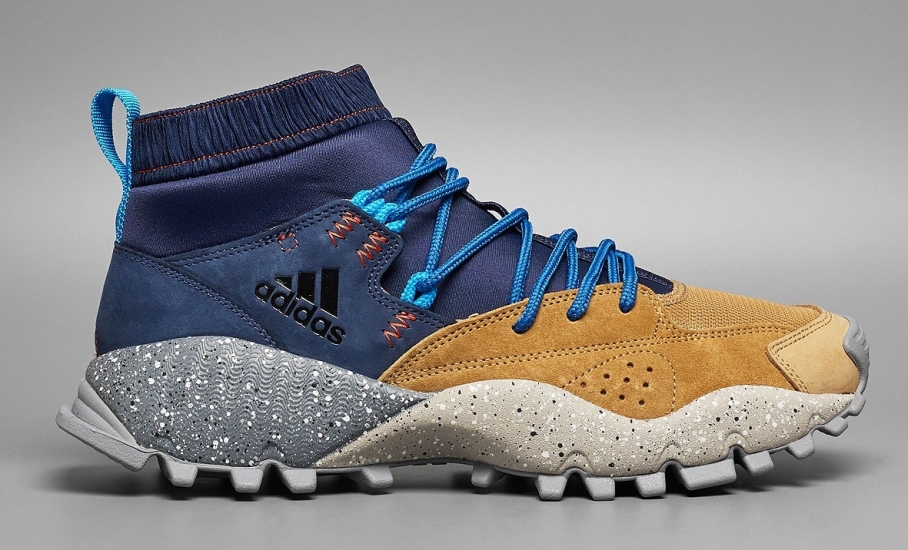 When it comes to footwear for winter holidays, the first stop for many here is mostly at Timberland, and the first choice, the brand’s ubiquitous and much-knocked-off 6” Premium Boot. That’s hardly surprising when the boot silhouette or high-cut style is not a must-sell for retailers. Except for basketball shoes, it is not exactly a breeze through Queensway Shopping Centre when it comes to finding kicks that look suitably winter.

That is why Adidas Consortium’s SeeULater boot conceived in collaboration with the Tokyo retailer Mita Sneakers caught our attention. Amid the Ultra Boosts in assorted colour combinations (black is, of course, the most popular), this particular shoe’s rugged form was mountain top sticking out of a thickness of conifers. The mid-sole is especially fetching, with the speckled two tones that suggest hard-wearing mineral or stone, something a petrologist might find interesting. The interior of the shoe is a neoprene sock—a la Nike’s Air Huarache—and this is in the grasp of suede toe box and counter panel in dual-colour pairing not unlike the mid-sole. The chromatic combination underscored by the teeth-like, pale grey outer sole is indeed striking. The Japanese sure know their colour aesthetic.

The SeeULater is, in fact, a hiking shoe first released in Japan in the mid-90s. Perhaps due to the intermittent releases, it has become a bit of a cult boot among sneakerheads. Mita Sneakers’ version is, according to Japanese media, ode to Tokyo’s Ameyoko Shopping Street, not far from Ueno Park, where many shops there sold the SeeULater in the 1990s when it was wildly popular. But Mita Sneakers isn’t the only one to give the SeeULater a dramatic makeover. In the season earlier, another Japanese label, White Moutaineering, released a black-Primeknit-upper-on-white-mid-and-outer-sole version to much acclaim. The shoe reportedly sold out in no time, possibly due to the overwhelming reception it received when designer Yosuke Aziwa showed it at the Pitti Uomo in January.

As they say, you simply can’t keep a good thing away. Looks like the latest iteration will enjoy the same fate.