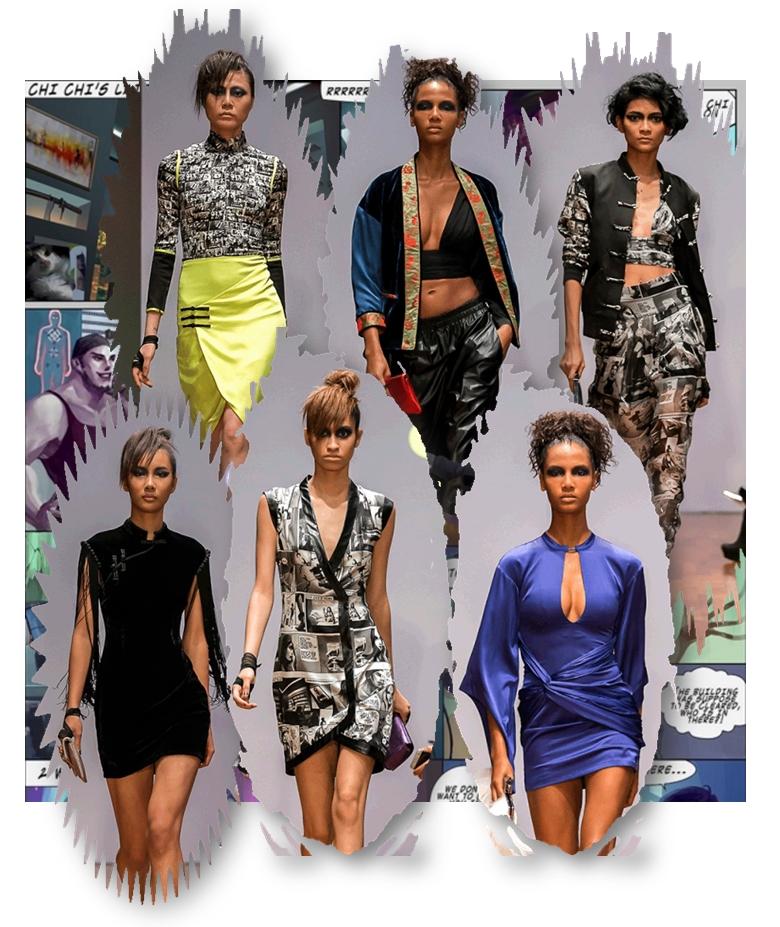 Fashion is sometimes like a joke: there are good jokes and there are bad jokes. And, now and then, you don’t get the joke at all.  In line with the ‘Anime’ theme of the collection, Chi Chi Von Tang’s debut Singapore Fashion Week show opened with a video presentation of a purported sighting of a super vigilante—“an elusive powerful woman” that is “tall, slender, Asian, in her mid-thirties”. But this was not a motion-picture animation. Rather, it was an amateurish live-action “breaking news” flash that could have been one of the class assignments submitted at the Singapore Media Academy. As if all that was not enough, talents (the brand’s own staff, it was reported) acted out the scenes on the catwalk!

By now, we’re not left in the dark that the mysterious one-woman rescue mission is a Chi Chi Von Tang aka Lisa Von Tang aka Lisa Crosswhite. Ms Von Tang (for simplicity, will stick to this moniker) is a girl-powered go-getter of Chinese and Canadian descent, who has quietly worked on her Chi Chi Von Tang label about a year ago and came to some prominence when it was reported that one of her yet to-be-released pieces from the ‘Anime’ collection was seen on a guest at this year’s Met Gala to celebrate the opening of Manus x Machina: Fashion in an Age of Technology.

That cute number—with manga, not anime, illustrations by Canadian-Chinese artist Liao Mujia for the skirt—was picked up by our local media and celebrated as some breakthrough. Suddenly Chi Chi Von Tang became a label to watch. And watched we did. The spirited show was opened by Ms Von Tang’s favourite Malaysian model, the Seremban native Tinie Bibbaby, who storm-twirled the runway with a fierceness worthy of a Chi Chi Warrior, as fervent followers of “Chi Chi fashion” are called. It’s all very Mother Monster and her Little Monsters, of course. Ms Bibbaby wore a sleeveless top emblazoned with the question “Who is Chi Chi Von Tang?” (the back should have read, “Who cares!”) and shorts over which a printed fabric was somehow fasten to the waist as an open-front skirt. So pleased Ms Bibbaby must have been with what she was given to wear that prior to the show, she posted a 14-plus-minute live feed of the backstage action on Facebook, declaring how she and fellow model Tuti Mohd Noor “make Malaysia proud”.

The opening number immediately left you feeling that this would be about styling rather than design. Chi Chi Von Tang has been described as a “street-luxe” label with what the brand says is a focus on “statement jackets”. The debut collection early this year was “inspired by Chinese couture (oxymoron or not, we leave it to you to decide) and the fire and swagger of Grace Jones (still firing and swaggering?)”. And where’s the street and the luxe and the Chinese-couture? It’s all exemplified by the Chi Chi Warrior Bomber—a flight jacket with frog buttons added to it and ethnic fabrics for sleeves. Should the exploration of Chinese or Asian motifs be this simplistic or reductive?

Lisa Von Tang’s ‘Anime’ collection stays close in spirit to what she has set out to do from the beginning. The designer, by her own admission, “does not come from a traditional design background” and Chi Chi Von Tang “celebrates unique spirits, courage and color”. On the narrow runway in the Auditorium Foyer of the National Gallery last night, there was the predictable pastiche of styles loosely held together by Oriental details such as frog buttons and fringes. Whether any of these can be considered unique really depends on one’s cultural standpoint. In Ms Von Tang’s case, it is a Western mind reconnecting with her Eastern roots, hence the potentially tacky amplification of Oriental exotica. Ms Von Tang even crossed into Priscilla Shunmugam’s territory by sending out her interpretation of a cheongsam, which looked like something Sun Ho might wear if she were still shaking her booty to stardom in LA.

The disparate world of fashion is full of brands that are born in an alternate universe, a colourful recess that does not tune into the aesthetic common denominator that connects the groundbreaking designers of worth. Chi Chi Von Tang’s ‘Anime’ collection seems to be from that other cosmos, where “street” is euphemism for not pursuing refinement. In fact, to us, it has the requisites that will prompt Tim Gunn to say, “Clothes do not exist to humiliate their owners. Please do not force garments into performing psychological tasks for which they were not designed!”

Danelle Woo has been quietly running her frilly Aijek label to enviable success. Regardless of where the line is carried, from the now-defunct Mporium to Tangs, her most visible stockist, Aijek has chalked up top sales, and has been enjoying a large following of customers who look at the clothes uncritically. On the sales floor, that is understandable: you see, you buy. But once the garments are shifted to a runaway, they attract far more intense scrutiny. Clothes on hangers can get away with many things, on models working a catwalk, it’s harder—a lot harder.

For her Singapore Fashion Week show yesterday, Ms Woo broke no new ground. Perhaps that isn’t imperative. Once you’ve built your line on a formula—essentially producing what’s already the rage and seen in the marketplace, you can bore your audience to tears, and people will say that you’re staying true to your signature. Aijek is easy to wear and easy to love. The thing with anything this easy, is that you may just as easily tire of them. 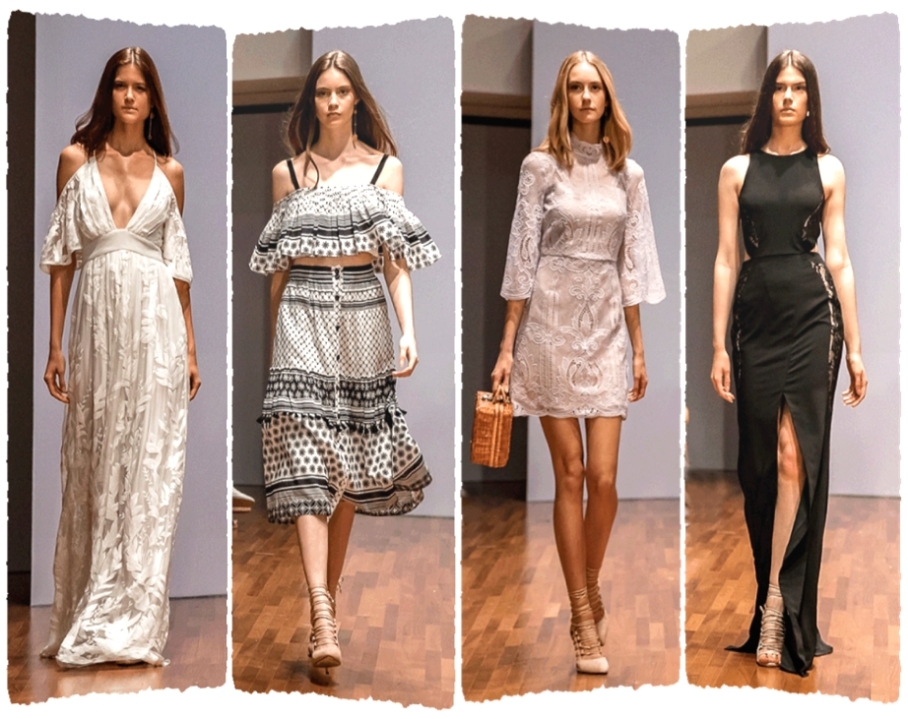 How many dainty rompers does a woman’s wardrobe require? Or, for that matter, cold-shoulder tops that look suspiciously like those you saw in Forever 21, just yesterday? Or lace dresses that will be picked up by a bride-to-be for her bridesmaid? There’s a pattern-book approach to assembling the collection: every conceivable neckline, sleeve or skirt length and shape, all manner of tactile properties in fabrics were given a fighting chance. (Interestingly, of the 35 looks Ms Woo presented, there was only one pair of pants.) This is a merchandiser’s way of pulling together a line rather than a designer’s: more, more, more; repeat, repeat, repeat.

An inductee of this year’s Fashion Futures (so too are Max Tan and Stolen’s Elyn Wong), Ms Woo basically offers the kind of ultra-fem clothes that straightforwardly qualify for webzine listicles: “10 outfits you’ll wear non-stop”, “20 maxi-dresses to buy for a BFF gathering”, “30 bustier numbers to stunt colleagues at the annual D&D”, “50 items your boyfriend absolutely hates”. It’s all well and fine, of course, but do these clothes deserve to be put on a runway?