For Singapore Fashion Week’s opening show at the National Gallery, Guo Pei brought over what she showed in Paris two seasons back 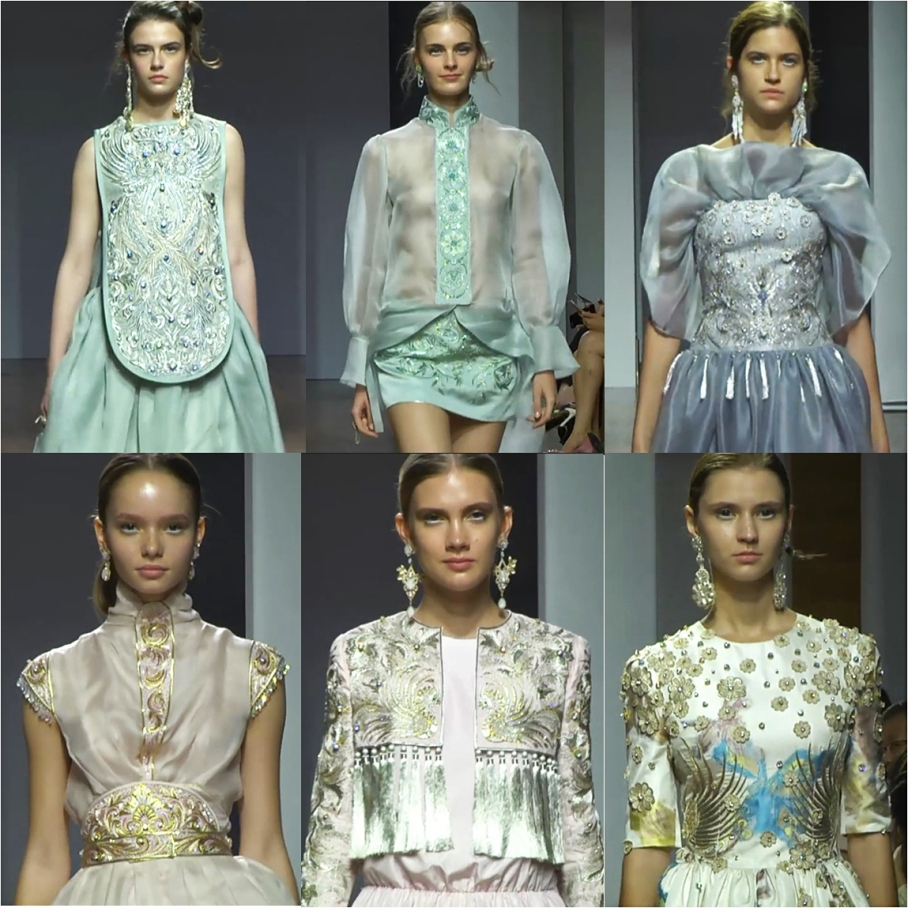 As guest designer of the Chambre Syndicale de la Haute Couture, China’s  Guo Pei has been enjoying Parisian exposure for two seasons now. Yet, for the debut of the re-branded Singapore Fashion Festival—Singapore Fashion Week (SGFW)—this evening at the National Gallery, Ms Guo showed the older of the two: what she unveiled for the first time during Paris Couture Week in January this year: the spring/summer 2016 collection, now called the “Courtyard” collection.

Is it probable that, perhaps, Ms Guo does not take SGFW seriously? After all, this is not Paris, where the designer had set up an atelier last year to better impress the world. In fact, her label—as seen on her website—now reads ‘Guo Pei Paris’. Despite past attempts at establishing our island as a couture point of sale, it is possible that there are those who do not consider us a source of sizeable business. It is, therefore, tempting to surmise that Ms Guo was showing for the sake of showing, if not to humour the organisers of SFW.

Despite a collection not on the scale of the famed omelette dress or the mind-boggling 1002 Nights collection, Guo Pei’s work is not easy to appreciate or view as relevant. For those conditioned by the aesthetics of couture as it is known—essentially French and centred in Paris, Ms Guo’s predilection for princess gowns is barely palatable, let alone awe-rousing (the crowns were especially tawdry). These are, no doubt, special-occasion wear, but you can’t be certain if she’s designing a prom dress or a bridal kua, or the two rolled in one. The show was visibly Guo Pei’s very own Princess Diaries.

To be sure, fantasy has always been part of Ms Guo’s repertoire. From 1002 Nights to Samasara to Legend of the Dragon, her designs mirror a flight of the imagination that is manifestly an Oriental vision of a regal Western world. Although what she showed at the Supreme Court Terrace of the National Gallery was not as dramatic and ethnic as her past presentations here, such as the Chinese Bride collection for Digital Fashion Week (now merged with SGFW) in 2013, Ms Guo clothes are still removed from the stylishness that is consistent with what women want today.

Certainly, the clothes are exquisitely embroidered, beaded, laced, appliquéd and fringed—surface treatments that have become known as “her DNA”. It is well to want to embellish, but to adorn without a judicious eye can be what the Chinese are inclined to call mei pin (没品) or lacking in taste. Ms Guo repeatedly claims to be inspired by ancient Chinese designs and crafts. That she feels passionately for decorative techniques of her country’s past is understandable, even admirable, but zeal that traipses into kitsch and costume is dangerous territory. Should Ms Guo be reminded that she’s not designing for a period TV series brought forward a few hundred years? This is not costume for Empresses in the Palace (also known as The Legend of Zhen Huan or 后宫·甄嬛传) updated for the 21st century!

The visual excess presents another problem: it is hard to see design finesse in areas such as cut and tailoring when there is so much adornment going on. Ornamentation, trimming, and gilding are only a part of couture. What goes beneath matters too. In fact, one never reads of Ms Guo’s work in terms of tailoring and draping. But, as we have noted before, Ms Guo may have some understanding of engineering since her heavy clothes would require a framework to sit on the body. Unfortunately, therein lies what’s disturbing. For many of the dresses, the body is merely a hanger, even for a professional model. In the second look of the collection, for instance, a bib-front dress looked like it had an embroidered tongue just plonked on the chest. Which came first—the heavily embellished panel or the dress? Or was the latter an afterthought?

It is not unreasonable to assume that Ms Guo’s atelier comprises mainly the flou, an assumption that could be consistent with the dressmaking she had learnt at Beijing Second Light Industry School, where she graduated ten years after the Cultural Revolution ended. In her couture, she shows very little tailoring and no stiffness and form associated with suiting—perhaps as recoil from the surfeit of Mao suits she saw and experienced during her formative years. In this “Courtyard” collection, Ms Guo offered three pairs of pants—all cut pyjamas style (or like auntie slacks) and none with the sharpness and snug of, say, Armani’s.

Strangely missing is the reference to “courtyard”. The Supreme Court Terrace is, of course, no courtyard. It is a new fourth-floor space designed around the rotunda that once sat atop the Supreme Court. Unlike her Paris show, which was made to look like a Chinese courtyard, albeit one that could have been transplanted from a restaurant on Beijing’s Guijie in Dongzhimen, the National Gallery show gave no hint of what was described by the media as inspiration derived from imperial ladies walking in a Chinese courtyard.

In fact, if there were any allusion, it was in the pacing of the show: soporific, compounded by music that’s on the side of monotonous. If the gowns in the end were meant to be the crescendo of the evening, it was really the confectionery at a wedding that nobody wants to eat. Whether the presentation was about ladies walking in a courtyard, Ms Guoi’s destination seemed less the wardrobe of customers than storied museums, such as the Musée des Arts Décoratifs in Paris that staged her first solo exhibition in the city in July 2015. Art and fashion: whether the twain shall meet, Guo Pei won’t stop trying.

Singapore Fashion Week 2016 is staged at the National Gallery from 26 to 30 Oct. Photos: SOTD