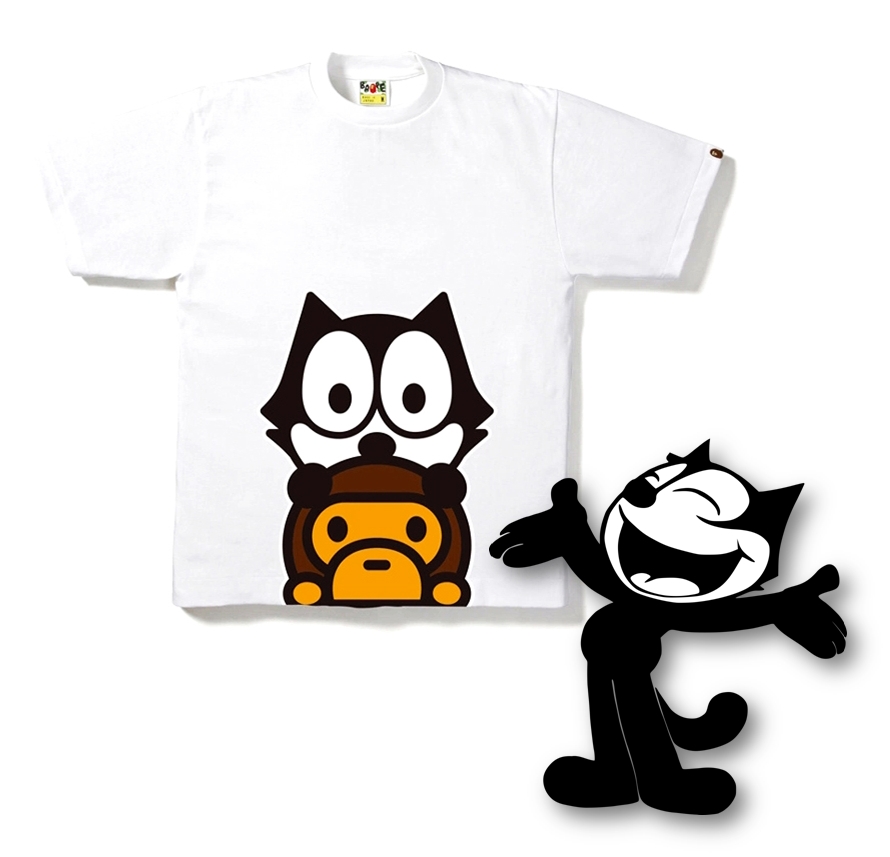 I’d be the first to admit; I can’t stand mice. Although I am a dog lover, give me a cat any time. That the world’s most famous animated character should be a mouse truly escapes me. And, have you heard it speak? I’d rather be locked up in a room with a yellow canary. And you can throw in the granny!

It doesn’t matter if you don’t know which rodent I’m referring to, or which bird. It now gladdens me to no end that, of the many animal logos fronting fashion brands and in the face of computer-generated cartoon characters such as those of the Minions gang or the irascible Frozen sisters, a black-and-white, hand-drawn cat from the silent-film era is picked to make a comeback. “Felix the Cat, the wonderful, wonderful cat…” Yes, I’m singing!

And what’s fascinating is that Felix the Cat is paired with Baby Milo, the monkey of indeterminate parentage at Japanese street wear label, A Bathing Ape. Unfortunately, I can’t tell you why a simian that bathes deserves a clothing line. Apparently, this one does. Like many Japanese brands, the chosen moniker is misleading since its chief primate, as far as I know, has never been depicted taking a wash. Founded in 1993, A Bathing Ape offers a logo that shows the hirsute countenance of a hominine beast that could have been Caesar of The Planet of the Apes. 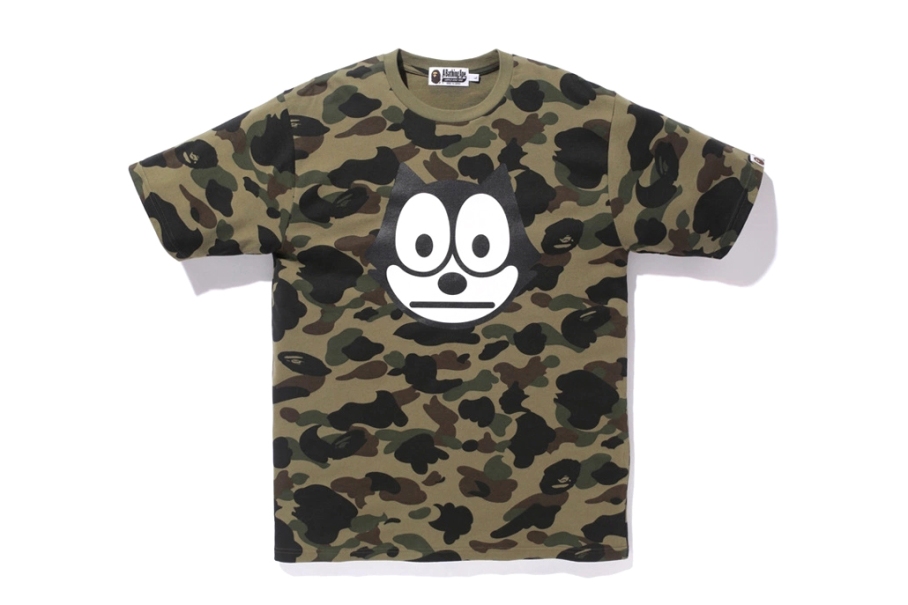 In fact, the brand’s creator Nigo—a T-shirt-obsessed Beng of a character in a sea of serious Japanese fashion intellectual types (with the name Tomoaki Nagao on his IC)—has professed to a near-obsessive love for the original 1968 film adaptation of French author Pierre Boulle’s book La Planète des Singes, as well as the sequels between 1970 to 1973. While some of us may have loved the films enough to collect toys from the early days (such as those by Mego Corporation), Nigo built a clothing empire. Success meant he could indulge. In 2003, with the completion of his multi-million house, Nigo was able to display what was then considered to be the world’s largest collection of Planet of the Apes toys.

So it is not surprising that there is a Milo, who is the baby Caesar in the Apes films. It is not likely that A Bathing Ape’s Milo is inspired by the Milo of Croton, the 6th century BC wrestler, known to be the associate of the philosopher Pythagoras (yes, of Pythagorean Theorem fame), but I speculate. Baby Milo is cute, by responses to most first-time encounters with it. Its cuteness bears little semblance to the central figure in A Bathing Ape’s communication, which mainly refers to the brand by the portmanteau: the cleverer and cuter—though not sexually suggestive—Bape.

Baby Milo, by the way, isn’t such a baby anymore. This year it turns 17, and, oddly, it is still a quiet ape with none of the teenage angst typical of those in its age group. If a comparison is required, the Powerpuff Girls are 21: marriageable! I think Baby Milo has no hang ups with regards to his years of existence, preferring its cohorts to be older. He has partnered Spongebob (31), Mario (of Super Mario fame, 31 or older), and the rather mature, equally silent Hello Kitty (42)!

Felix the Cat is, of course, much older. If his prototype, the scrawnier Master Tom, conceived in 1919 for the silent short Feline Follies, is taken into consideration, Felix is a near-centenarian at 97! Although his last appearance in film, to my knowledge, was a cameo on Who Framed Roger Rabbit, there isn’t a discernible decline in the cat’s popularity, especially in the land of the kawaii. Felix himself, in fact, went to Japan in the 1920s, in the film Japanicky. In the land of geishas, he taught the Japanese how to sit on chairs—creating them from the number 4 and the capital H—much to the chagrin of a local priest!

His typical juvenile, even culturally insensitive, antics aside, Felix has endeared himself to Japanese city life to the point that even when his cartoon shows are no longer seen on local television and few of today’s Japanese children know who he truly is, his cheerful face still lives on, to my amusement, in the wrapping of the 56-year-old Felix Gum, a-JPY10 dagashi (literally, cheap sweets) that’s found in convenient stores.

The re-emergence of Felix the Cat alongside Baby Milo may revive the interest in a feline that has largely been overtaken by cooler and more “pop” characters. While I think many may consider it jejune to be so in love with a cartoon, message-free figures on a T-shirt beat rude wording that antagonises onlookers into confrontation in MRT trains. I am all for renewing the popularity of Felix the Cat, including his yellow bag of tricks (which I think bears an uncanny resemblance to LV’s Monogram canvas!).

There is, however, such a state as too much of a good thing and an eventual slide. By 2010, Nigo’s star label, once the untouchable biggie in Tokyo’s Harajuku, specifically ura-Harajuku (ura = “back”), where the brand quietly emerged, started closing shops in Japan, as well as in Los Angeles, where the flagship was once frequented by hip-hop stars. The in-the-know, cool kids on both lands had moved on to other trendy luxury urban brands such as HBA. In 2011, it was announced that Hong Kong’s I.T. Group acquired 90 percent of Nowhere, the parent company of A Bathing Ape. By then, Nigo was close to declaring bankruptcy.

Still considered an influential Japanese street-wear original, Nigo was soon hired as creative director under Uniqlo’s UT line. It is arguable if Nigo has really brought UT to another level other than involve his friend Pharrell Williams in a one-off project. Is there still a craze for street-wear in the style that Nigo once imagined it?

As much as Felix the Cat and Baby Milo together are a cute pairing, their appearance is but one in a long line of Baby Milo/A Bathing Ape partnerships with other brands that are fronted by adorable mascots. Increasingly, the collaborations, too, are looking predictable. Perhaps, the Ape needs a bath after all. Nothing like a good soak to wash away the stale to start afresh.

The Bathing Ape X Felix the Cat cotton T-shirts, SGD169, and other articles of clothing are available at A Bathing Ape, Mandarin Gallery. Product photos: A Bathing Ape