Screen grab of Beyoncé from the trailer of HBO’s Lemonade

Over the weekend, when I learned that Beyoncé’s new “visual album” was going to be called Lemonade, I shuddered; I really did. I am not receptive to the painful cliché of what one can do with lemons if given those citrus fruits, and I feared that somehow Beyoncé was going to lead me down that path. And true enough, she did. Beyoncé’s sixth studio album is called Lemonade apparently because during a family get-together, seen in one of the videos, husband Jay Z’s 90-year-old grandmother was heard saying, “I was served lemons but I made lemonade.” The grand-daughter-in-law, inspired, was then going to show us how she makes America’s favourite summer drink.

I thought yellow was going to be pervasive, a chromatic motif that will be used to tell stories in the videos-as-narrative. One frock stood out, but it is not in the yellow of lemons. The dress, part of a wardrobe that prompted Glamour to say the costumes of the videos were “beyond fierce”, is of a yellow that seemed to have been mixed with dirt, an ochre. There is certainly no sunshine in it, although to be more positive, it is close to the yellow of Van Gough’s sunflowers.

I was definitely not thinking of ribbons, birds, submarines, or bikinis. What did come to my mind was the mustard-hued poultice that was once offered to me to calm the painful sting of a jellyfish. What I also saw were the monks’ robes during the ordination of a friend in a temple in Nakhon Sawan, Thailand. These robes were once only made of used or discarded cloth. They were boiled with vegetable matter such as bark, flowers and leaves before being stained with spices such as saffron. I wonder if Beyoncé would make nasi kuning if life handed her turmeric.

What’s with R&B stars and yellow anyway? Just last year, during the Med gala in May, Rihanna wore a monstrosity of a Guo Pei dress in the shade of omelettes. In another era, Whitney Houston, too, was never averse to eye-popping yellow: she wore that aureate figure-hugging Marc Bouwer dress for Whitney: The Concert for a New South Africa in 1994. Could there be a visual advantage in donning a colour that can represent the sun or warn of the presence of poison?

Roberto Cavalli’s dress as seen on the catwalk during the recent autumn/winter 2016/17 presentation in Milan. Photo: Roberto Cavalli

Lemonade is a “visual album” (Beyoncé’s second, in fact) and that means it’s accompanied by full-length videos—every track, here, 12 of them, gets its story told in moving pictures, all made seamless by the reading of the poetry of Somali-British poet Warsan Shire. Clearly, the visual album is conceived to appeal to a visual generation that prefers to see a song than hear it. For such an album to be even more engaging, Beyoncé has to play up the fashion aspect of the presentation. Fresh from launching her new fashion line, the athleisure-centric Ivy Park, with Topshop, Queen Bey has to prove her worthiness as fashion royalty, even when she’s holding sway in the court of celebrity style.

The dress that her fans have been raving about is a seven-tier, off-shoulder gown designed by the two-season-old Peter Dundas for Roberto Cavalli worn in the track Hold Up. This crush-pleated dress that swings with distracting shagginess as you walk is not easy to wear, and especially less so if you do not have the girth of a walking stick. Beyoncé is a voluptuous woman, a tad too curvy for an essentially linear dress held up by straps that are as fine as strings. What are those two misshapen globes squashed through the opening below the neckline? Mrs Knowles-Carter, I’m afraid, you look like you’ve squeezed into one leg of a lion dancer’s pants!

The Cavalli dress appears in the video of the reggae-tinged Hold Up in which Beyoncé emerges from a building that looks like our old City Hall, with water gushing behind her and wind blowing in front. Much of the rest of the film sees her prancing in a sound stage dressed as an urban neighbourhood. As she smiles-seethes-sings through the video, she strikes what catches her fancy with a baseball bat that identifies itself as “hot sauce”. There’s considerable destruction while sprightly explosions bloom behind her. No one around her is bothered by what appears to be escalating into a war zone. Here you have a swaggering gladiolus in full anti-social, crime-abetting behaviour, and what is it for? She suspects (“something don’t feel right”) a man she loves cheated on her. As a consequence, the woman can’t tell “what’s worse, lookin’ jealous or crazy”. The woman is livid.

If Lemonade is holding the glass up and speaking for women, is it also a collective reprimand disguised as a visually rich music video? And is Beyoncé dressed to reflect how women want to be clothed when they wish to make a point angrily? When cross, wear yards and yards of floating fabric? Still, I don’t get what she’s trying to say with that yellow. If the crazy popularity of Vetements’s DHL T-shirt is anything to go by, there’s no fighting this colour most of you call cheerful. 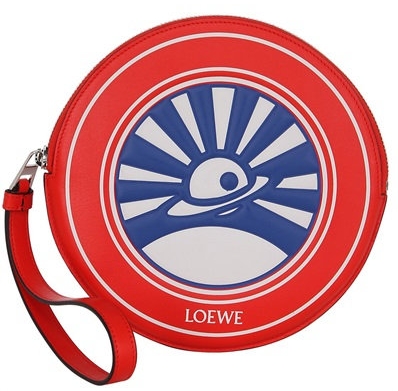 It is not quite certain if an envelope of a bag in the shape and size of a dessert plate such as Loewe’s ‘Saturn’ can be called a clutch, but we shall stick to a description we know. This saucer-like bag is, according to a Loewe sales staff, considered a pouch, which sounds a lot more capacious than it really is. Regardless, we are rather drawn to this clutch that Jane Jetson would probably love.

What’s fascinating is the reference to the Land of the Rising Sun by a brand that originated in Spain. We’re not only referring to the 19-cm in diameter red dot, but also the manga-style illustration of a space ship that seems to be drawn in Sixties Tokyo. It’s cute but possibly a little too Harajuku-kawaii for use in a meeting with the chief financial officer.