I’ve always liked Reebok’s Instapump Fury, especially those in the craziest colour-and-print combinations, but each time I try on a pair, I feel I am treading in Titanics. Of course I am contradicting myself since it’s the massiveness and the height that I am drawn to. With each re-imagined version, in particular the Darth-black pair by Factotum and Atmos (sadly, available only in Japan), I convince myself that they’re boat-sized enough for me, but, in the end, they still look, even from up here in my best posture, too much a tanker.

That’s why I’m attracted to the scaled-down sibling, Furylite, since it is just sampan enough for my regular-size feet. The Furylite is not a new shoe, and there’s no denying that its lineage can be traced to what was once considered a monstrosity. But the less-fierce version is no slouch. In fact, to its detriment, the Furylite is considered a “hipster trainer”. But I give no thought to its street cred; I like it because of the Roshe-like body and a padded quarter that is oddly space-age. In this iteration that caught my eye, it is given the ‘pack’ treatment known as Cloud. I am not sure what the designers at Reebok saw, but the print looks like camo-for-the-desert to me. What is unusual is that the shoe is underscored by a polka-dotted midsole. Macho camo and dotty dots—some of us just love odd couples.

Reebok is, perhaps, enjoying a bit of a moment now that Gosha Rubchinskiy, the Russian wunderkind backed by Dover Street Market, has given the decidedly low-tech-looking Reebok Phase One sneaker a makeover. In the wake of so many celebrity collaborations that push Adidas to the noisy, crowded front, sometimes it is just more fun to jog along with those unconcerned with the finishing line.

Liberty London is so linked to floral prints that those who have not been to the UK’s capital city may not realise that it is foremost a department store, and a really nice one too. It may not be as swanky as Harvey Nichols, where the crush of their Boxing Day sale is almost legendary. However, in the West End’s Regent Street, in a building with a quaint Tudor-style façade, you’ll find a carefully stocked emporium that is as fascinating as a cabinet of curiosities. And it is on the third floor of the store that you will be smitten with what Liberty has come to embody: the happy floral patterns, stashed in the Liberty Print Room, still enveloped by bohemian air.

Some of that flower-patterned happiness arrived on our shores this morning via Uniqlo. Here’s another collaboration that the Japanese brand knows they have got right. In their design cache now is a print pedigree that can be transformed into modern clothes if applied judiciously. While girly dresses and mumsy tops with full-on flowers are unavoidable, and Uniqlo obliges, there are pieces with a graphic sensibility that reflects the brand’s increased love for patterns paired with solids, such as the women’s graphic T-shirt (below left) that are akin to those seen in Tokyo’s Ships and Beams. To be expected, however, are unimaginative ways these clothes will be worn by women who do not differentiate between bed clothes and those for social engagements such as a movie date. 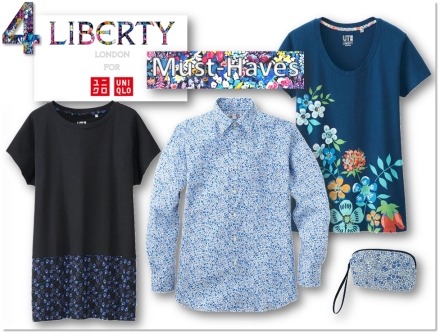 Liberty has been around for more than a century. While the immediate association would conjure prints and fabrics, their history can be traced to an early basement space called the Eastern Bazaar. As the name suggests, Liberty was quite the destination for “decorative furnishing objects”. Heritage department store standing aside, they’re also at the forefront of modern British fashion, championing the work of Vivienne Westwood and Alexander McQueen and, at the same time, attracting brands and designers to their prints. In the past decade, Liberty has collaborated with some of the most illustrious names such as Fred Perry and Mastermind Japan, and sneaker giant Nike, even street wear powerhouse Supreme, but brand partnerships were, in fact, forged as early as the ’60s.

Back then, Carnaby Street (now home to English brands such as Pretty Green and Barbour), really a stone’s throw from the Liberty store, was the heart of “Swinging London”. It was both convenience and Liberty’s authentic prints that drew designer such as Mary Quant and Jean Muir, as well as retailers such as Biba to work with the store. The cool English-girl vibe, still strong at Burberry, could be traced to those days. Then in the ’70s, Cacharel’s Liberty-print maxi-dresses sealed the store’s reputation as the go-to purveyor of pleasant petals.

To augment the Britishness of the collaboration, Uniqlo enlisted Nick Knight to shoot the images, and CHAOS Fashion’s Charlotte Stockdale and Katie Lyall for creative direction. Photo: Jim Sim

Given today’s penchant for more aggressive motifs such as Givenchy’s Doberman, there’s something innocent about Liberty’s dainty flowers. These are blooms that hark back to simpler and gentler times. They recall sewing machines atop the kitchen table and a mother diligently sewing her daughters’ clothes in time for the approachng Lunar New Year. One of SOTD’s contributors remember her grandmother making quilts of similar prints that are still in appreciative use. While the parental associations may put a damper on cool, so vital in the urbanite’s turnout, sometimes a little homespun has more heart.