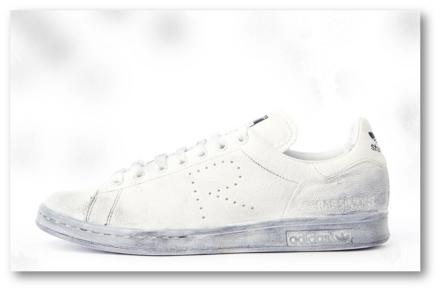 Raf Simons and Celine’s Phoebe Philo OBE were the first two designers who elevated the profile of Adidas’s nearly-forgotten tennis sneakers, the Stan Smith, by wearing the white pair on the catwalk to take their customary bow at the end of their show. Mr Simons went one step further; he walked out onto the runway in soiled and rather beat-up Stan Smith that no mother will approve in her Lysol-ed home.

If people can be a hit in an Insta-second, so can shoes. In no time, fashionistas—interestingly, not sneakerheads—considered the sullied tennis classic positively cool and the only way to wear them. As if to ratify this thinking, Mr Simons belatedly released a version this season that is possibly a facsimile of his own shoes. These are definitely not tried-to-death display kicks.

By now, however, the Stan Smith, although still considered iconic, risks becoming the hackneyed choice of stylish footwear. Only a cursory glance is required to catch the many versions available, at all price points. So omnipresent is the plain tennis shoe outside a court that it is quickly nearing tear-your-hair dull. But, like clothes, they can be refreshed by not making them look fresh.

Dirtying perfectly clean shoes are rather similar, in terms of merchandising objective, to bleaching, staining, or paint-splattering otherwise perfectly good jeans, one of the very few garments of the fashion sphere that actually costs more when not looking perfectly new, or clean. Newness, as product development pros posit, surfaces from the appearance of old. Flog the horse and you can sell a more spirited steed. In fact, there’s such a desire and demand for tatty clothes and footwear that an entire industry has sprung up to make the new old, or at least, less new.

This really means, now you don’t have to go through extra lengths (or even step outside the front door) to get your pair of Stan Smith looking grubby, just as ragged jeans can be had without putting them through the paces in a coal mine. When improved digital products get tagged with a numeral mostly larger than the previous editions, should aesthetically worse-than-the-original shoes get named with a negative number? To be fair, Stan Smith Version -1.0 is really not the Raf Simons interpretation. The latter’s is far from tawdry. Like whiskered jeans, however, there is something oddly appealing about its scruffy appearance. When something looks used, you know it has had an earlier life, even if manufactured.