Best Night: although the track was not included in her Rebel Heart Tour show in Singapore, it pretty much summed up the evening for SOTD. More significantly, it was a concert of captivating choreography and couture 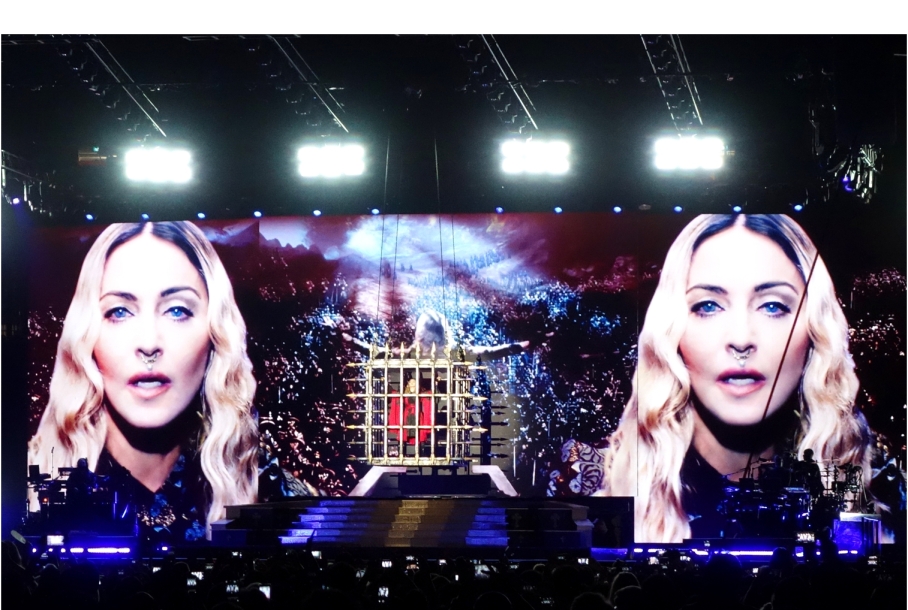 So few artistes in the YouTube age are able to merge audio and visual into a seamless whole, and really revel in the spectacle live that Madonna’s concert in Singapore last night was going to go down the history of visiting pop acts as the most powerful performance we’ve ever seen on our shores. Yes, even surpassing the Michael Jackson’s Dangerous World Tour stop here in 1993.

From the onset, it was a show worthy of MGM productions—brought forward to the 21st Century. Sometimes you forgot you were watching a pop concert. It had the rousing choreography of West-Side Story and the acrobatic flair of all the dancers that make Marilyn Monroe’s camp-moves-as-dance intoxicating. In fact, the routines had the glamour quotient of pioneering jazz-dance choreographer Jack Cole’s work with the one who convinced so many that Gentlemen prefer Blondes, as well as the classical grace of Alvin Ailey, whose dance theatre was where Madonna received her training.

As if that wasn’t enough, there were the stunning and wow-inducing acrobatic moves on sway poles that recalled Cirque du Soleil, but, to us, were more in common with the Pole Cats of the Oscar-winning Mad Max: Fury Road. As Madonna told Michigan State’s Macomb Daily last year, the Rebel Heart Tour performances will be a “characteristically theatrical spectacle”. And she meant it: the spirited singing and dancing unfolded in front of a huge back screen that projected some of the most arresting and intoxicating video graphics seen outside MTV. 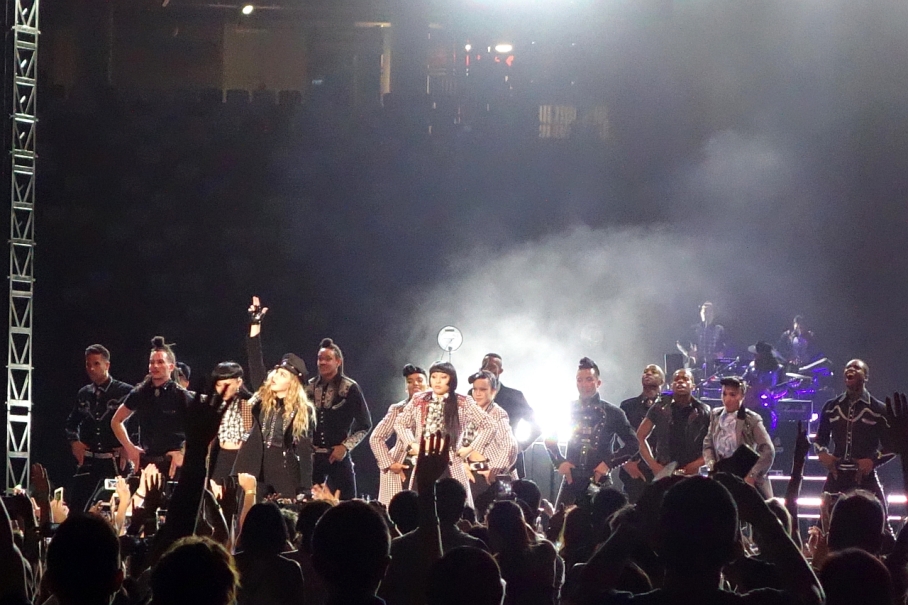 Madonna in Alexander Wang stomping in her inimitable way

Although, conceptually, Madonna played a big part (as she told the Rolling Stones she likes “to create personas and then the persona changes and grows into other things”), credit must also go to creative director Jamie King, the writer and director behind Cirque du Soleil’s Michael Jackson: The Immortal Tour. Mr King’s tableaux for the Rebel Heart Tour had the enthralling mix of story-telling, vivid characterisation (who could forget the black, clearly-male dancer channeling Jospehine Baker?), and dramatic visuals. Together with the inspired choreography of Megan Lawson and Jason Young, every set was calculated to stimulate the senses and stir the soul, even those interludes without Madge singing (when she had to undergo costume change) were a thrill to watch: definitely those dancers’ bungee jumping down a tilt-till-near-vertical rear stage!

What may have escaped the notice of concert goers, especially those seated at the back and too mesmerised by the overall visual glory to notice prancing dots, were the costumes, and not just Madonna’s but the dancers’ and back-up singers’ too. In a rare display of creative unity, the singer’s dance and singing mates weren’t clad in nondescript black leotards (or anything as bland), but in individually designed ensemble that had in common with cinematic, rather than concert tradition. It was really no wonder at all that the dancers appeared to enjoy what they did since they knew they looked good and fashion-correct.

Madonna has once again worked with her long-time costumer Adrianne Phillips. Ms Phillips, also a film costume designer (she was nominated for Oscars for Walk the Line and W.E.) is, thankfully, no Nicola Formichetti, who presently helms his own gender-dubious fashion line Nicopanda now that he’s not intimately connected to Lady Gaga’s costume choices. Madonna’s trust in Ms Phillips is apparent since the latter had designed the costumes of the Material Girl’s past five world tours. For the Rebel Heart Tour, Ms Phillips enlisted designers that are currently the rage, including Gucci’s Alessandro Michele, Moschino’s Jeremy Scott, and once-Balenciaga’s Alexander Wang. No doubt a motley group, but with the dissimilarity required for Madonna’s multiple-persona show. 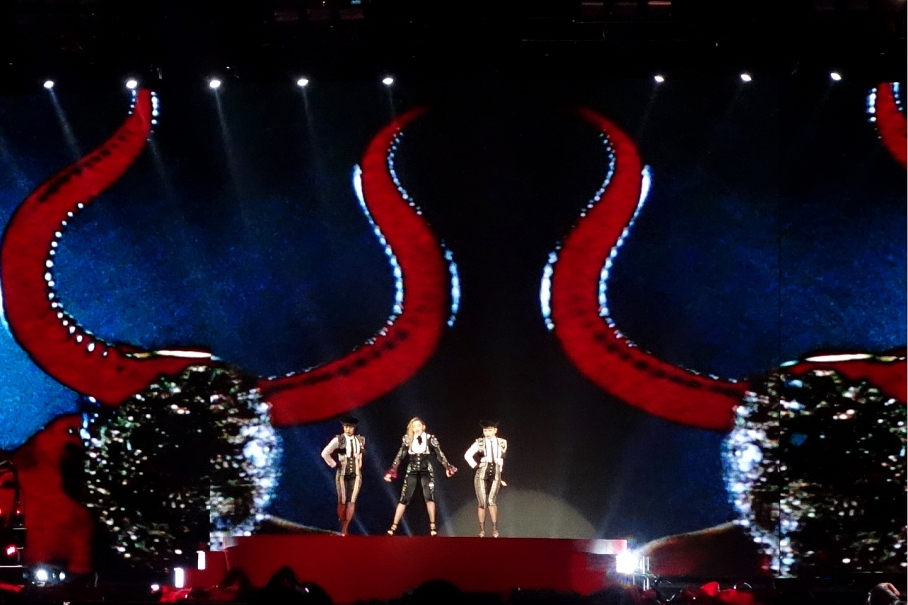 What impressed those who could still be impressed by such things is that Madonna used clothes, not no-clothes, to enhance the visual strength of her performance. There’s something strangely and comfortingly old-school about the presence of costumes and the act of costume change now that we’re in an era when singers have hardly anything on (Arianna Grande, Nicki Minaj, et al) or are badly dressed (K-pop stars!). But these are get-ups with so much fashion-speak that calling them ‘costumes’ somehow recalls Bob Mackie or, for Canto-pop die-hards, Eddie Lau. There were nothing as long-ago as that, not even anything resembling the iconic conical brassiere that Jean-Paul Gaultier designed for her for the Blond Ambition Tour in 1990 (although the bra made its catwalk debut in 1982). These clothes are contenders for a fashion museum rather than, ironically, Instagram.

There were four sets (five if that one encore were to be considered) and four main costumes. Some were themes Madonna had explored before such as that with the toreador jacket and knickerbockers, or the one with the ’20s shimmy fringed dress designed by Jeremy Scott (reportedly taking a huge chunk of the 2,500,000 Swarovski crystals that adorned the stage clothes). The most compelling for us at SOTD was the Spanish/gypsy ensemble designed by Alessandro Michele. This was unlike anything the singer has worn before: rather Elisa Doolittle residing in Seville. All the Michele details were there: the lace, the embroidery, the colours, the kooky romance. It was a softer Madonna that the younger set would probably (and regrettably) consider grandmother-ish.

What fashion observers got a kick out of, too, were the video projections accompanying the latter segments. The medley of Living for Love and La Isla Bonita (yes, two different styles but they paired beautifully!) were accompanied by sumptuous, monochromatic split-image visuals of Spanish fans, ruffles, fringes, lace, bangles, and castanets, all depicted smoothly in a Mary Katrantzou-gone-minimalist way. Not to be outdone were the swirling embroideries, chez Michele, during Dress you Up and Crazy for You, that turned the backdrop into a hypnotic kaleidoscope. Even if you were bobbing up and down way back and couldn’t marvel at the couture needlework of Madonna’s shawl, you would be mesmerised by the digital needlework on the rear screen. 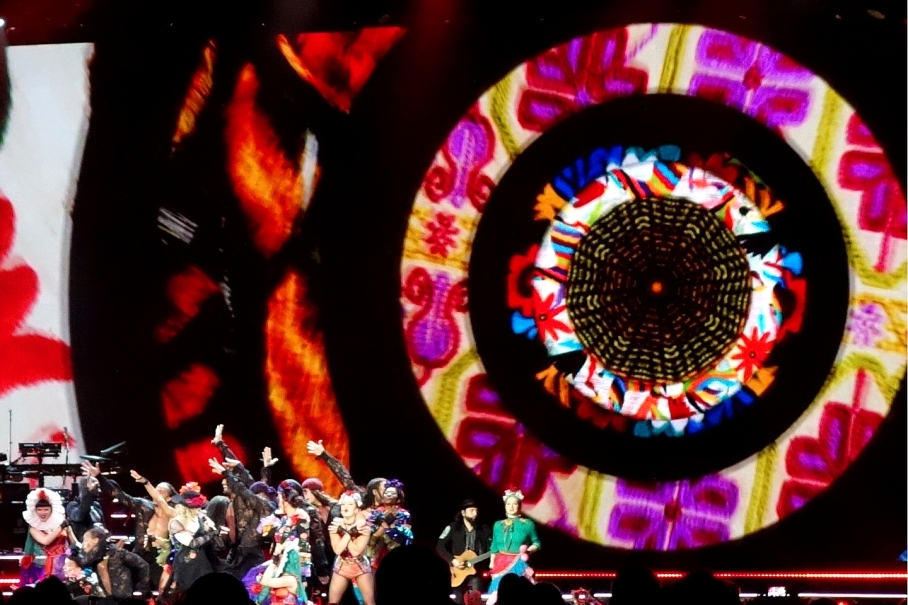 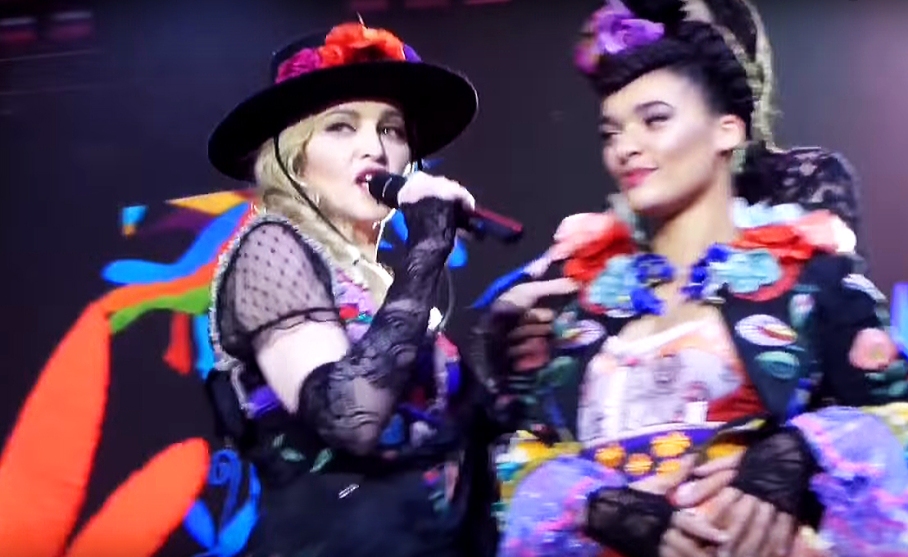 The Rebel Heart Tour concert is clearly a movable fashion spread. Sure, Madonna does not approach fashion as beguilingly as Björk; she does not embrace it as trashily as Lady Gaga; she does not wear it as girlishly as Talyor Swift. She’s no pundit of irony. One cannot, however, say she brings nothing new and visually exciting to the stage. She is a performer and she knows that every button, every bead, every binding (and that ultra-long barège of the ‘wedding’ sequence!) matter, and the sum effect is what makes a singer a performer.

Although her moves, at age 57, were not quite the dance-prance-cavort of the past (she was half-Vogue-ing her way through the sets), there was no denying the consummate artiste that Madonna still is. It is puzzling, therefore, that there were those—stage habitués themselves, no less—who thought that she sold out when the songs Holy Water and Devil Pray were omitted in response to MDA’s outdated restrictions. It isn’t quite clear if these individuals felt short-changed, but to equate Madonna with only controversial songs that bait the church is as reductive as associating religion with only violence.

Sexuality and erotica may be part of her repertoire—like Jack Cole, she F-bombed inveterately (surprisingly to the discomfort of not a few attendees)—but fashion will not be underplayed in her quest for musical dominance and relevance. Madonna is too powerful and savvy an image maker, and too ardent a fashion lover to minimise the communicative value of clothes. She may rip her top off, but she will not rip us off.

Photos: Zhao Xiang. Editor’s note: We apologise for the less-than-desirable quality of these photographs. SOTD did not attend the concert as a member of the press corp. The conditions where we stood unfortunately were not ideal for the kind of pictures we would like to publish here