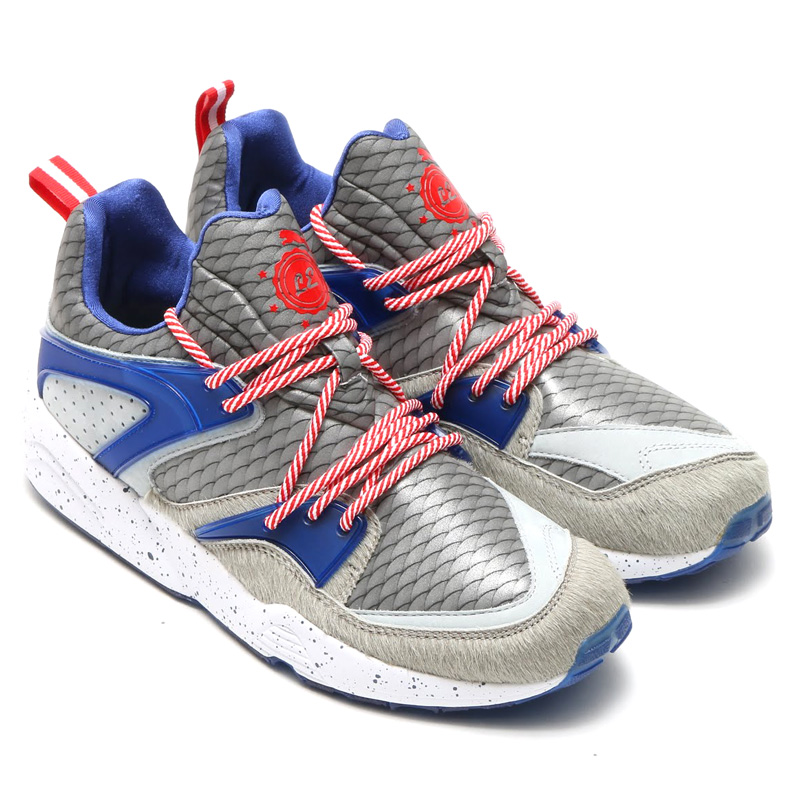 While Adidas Yeezy Boost 350’s second drop in black last week was making headlines and yielded, till now, crazy behaviour on the part of sneakerheads, a pair of shoes slipped frenzy-free into the market this weekend. The Puma X Limited Edt Blaze of Glory appeared as quietly as an angel at the retailer’s stores in 313@Sommerset and The Shoppes at Marina Bay Sands. The lack of buzz is remarkable considering that this is, in essence, a collaboration to mark SG50. Clearly, the golden jubilee of a nation isn’t big enough to drown the noise coming from a hip-hop-star-turned-shoe-designer. Kanye West sure knows how to steal a country’s thunder!

From an aesthetic point of view, there’s much to laud about Blaze of Glory. The shoe is inspired by, of all the visible things on our island, the Merlion. Yet, on a whole, it looks more futuristic than retro: an apt tribute to a forward-looking nation? There’s no denying the appeal of the silver, pony hair-covered toe box that purports to represent a lion’s mane or the ‘fish scales’ of the sock-like upper, made out of a reflective 3M fabric to symbolise a fish’s body. These sit atop an on-trend speckled rubber outsole. The shoe laces of candy-cane-like twists of red and white cords are, perhaps, the most obvious SG50 element since they colour-correspond to our national flag. They are also reminiscent of those brown paper bag handles once widely used, but now mostly seen during Moon Cake Festival at the original Tai Chong Kok bakery in Sago Street.

You’d think a shoe that references a kitschy icon would be a product of brash tastelessness. Blaze of Glory is a composite of details that manages to circumvent the obvious for something not quite outré, but definitely on the side of memorable fashion. Kudos to Puma for not going the Adidas way.

Puma X Limited Edt Blaze of Glory “SG50” drops in a limited run of 215 pairs. Each set comes with a specially-designed box, a T-shirt, and a fridge magnet. It is available for SGD250 at Limited Edt Vault, 313@Sommerset and Limited Edt Chamber, The Shoppes at Marina Bay Sands. Photo: Puma/Limited EDT

Or maybe, to liken to a more current creature, the one-eyed Minion?

Well, we admit we’re letting our imagination soar, but fashion sometimes makes us see things beyond the bodice and sleeves. And clever fashion designers use unexpected placement of details such as pockets to let one make out the surprising, such as mythological or animated-film beings. Here, we’re referring to Peter Jensen, a Danish, London-based designer who is known for his cheerful and, sometimes, tongue-in-cheek take on pop culture. His muses for the Spring/Summer 2015 women’s wear, for example, were the girls from the Peanuts sorority. Yes, Peppermint Patty and co!

That’s hardly surprising for someone who has a rather mad looking rabbit as logo/mascot. In fact, Mr Jensen is so enamoured with the cute that cartoons feature heavily in his designs. And American kitsch too, if you consider his muse from spring/summer 2005: Tonya Harding, the American figure skating champion whose notoriety leapfrogged from being implicated in the 1994 attack on her rival Nancy Kerrigan. Although disgraced and stripped of her 1994 US Championships title, Ms Harding would later (in the same year) feature in a Penthouse article that showed stills from a sex tape she made with her then husband that both sold to the publication for an advance of USD200,000 each, including royalties.

What has this to do with Peter Jensen’s designs? Probably nothing, except that Mr Jensen is attracted to strong female characters. His men’s wear, however, is less about muses (do male designers muse over other males for inspiration without appearing homoerotic?), but more about articles of clothing related to certain occupation or game. The cartoons are there too (the male cast of Peanuts), but it is the little details that allow us to connect with otherworldly creatures that are beguiling. And we’re especially attracted to this one-pocket T-shirt from the autumn/winter 2015 collection.

Tees with pockets appearing solo on one side of the chest (usually left), is quite the ubiquitous one-eye Jack. So to see a pocket appearing smack in the middle, 8cm below the neckline, is atypical. Back to the Cyclops that we saw, only perhaps more Scott Summers than Polyphemus, this is a top that will spur a viewer to ask if the pocket is wrongly placed. What’s also interesting to note is that the pocket is fashioned from the underside of the cotton piqué knit used in the main body. The smoother base provides a nice contrast, giving the pocket a more 3-D effect. Yes, as we said, it really is in the small details. (Insert smiley)

One of Hermès most expensive bags, the crocodile Birkin, now risks being un-christened as Birkin. Photo: Hermès

The Birkin, like the celebrities who carry it, is not impervious to scandal. Just last week, singer-actress Jane Birkin, whose name has allowed Hermès to produce the world’s most famous bag and, according to Forbes, become a USD40-billion luxury business, made a very public request: un-name the crocodile version of the namesake bag. Is this similar to un-friending on social media, and just as easy?

Apparently, the 68-year-old chanteuse-as-muse was “alerted” to how crocs were slaughtered to make Hermès bags, and she wasn’t terribly thrilled. It seems that her call to “de-baptise the Birkin croco” came after the animal rights group People for the Ethical Treatment of Animals (PETA) published a video on how these animals are handled on the slaughter table. These not-to-be-Birkins, however, would only remain nameless until “better practices in line with international norms can be put in place”, as spelled out in Ms Birkin’s statement.

The Jane Birkin request (note: this isn’t a demand) has caused a media frenzy, encouraging even serious news outlets such as Forbes and The New York Times to weigh in on the controversy. The old discord about the haves and have-nots, ethics and aesthetics, conspicuous consumption and discreet displays, resurfaced. The Birkin, even in not-so-glowing media glare, generates attention.

Closer to home, a scandal associated with the Birkin went viral not too long ago. Across the causeway, Rosmah Mansor, the high-profile and polarising wife of the Malaysian Prime Minister Najib Razak, was photographed carrying a Birkin that uncannily resembled one sold in June by the auction house Christie’s. According to the Wall Street Journal, that fuchsia crocodile Birkin with diamonds on its white-gold hardware was picked up by an anonymous buyer in Hong Kong for HKD1.72 million (or about SGD 306,000). The winning bid turned out to be the most expensive second-hand Birkin ever sold.

Social media went wild with reports that Mdm Mansor was the undisclosed purchaser. There were the usual denials; even an aide came forward to refute the accusation. The Prime Minister’s wife carrying a luxury bag is, perhaps, no big deal, but this glaring display of big-ticket consumption came at a time when the Malaysian PM was (and still is) embroiled in a financial scandal related to millions of dollars allegedly deposited into his personal bank account. All this bubbling amid the falling of the Malaysian ringgit against the USD and SGD adds to social-media posts already rife with disdain for certain members of the ruling party. The Birkin instantly became a stark reminder of economic divides and a symbol of the privilege class.

On our very own shores, the Birkin, too, is linked to scandal, scorn and spite. On top of the usual reports of society women carrying their Birkins to gala dinners (a no-no for those in the know since the Birkin is a day bag and must never be seen with an evening gown) and those whose collections of Birkins are housed in glass cabinets (put on view even at home smacks of showing off), there was the display of cold, hard cash stored in a capacious crocodile Birkin, so injudiciously posted on Instagram last year by David Gan. Mr Gan, hairdresser to the stars, has never been known to be a discreet consumer, but the cash, contained for all to see, has raised the bar. Flasks of bird’s nest he’s known to prepare for celebrity clients such as Zhang Zhiyi pale by comparison.

Despite the contempt expressed through social media for his lack of discretion, Mr Gan was not at all ruffled. He was quick to point out that the bag and its pecuniary content—“only $40,000”, as he told The New Paper—belonged to his employer Yuan Yuan, a wealthy, rotund individual reported to be in the “property business”. Of their initial meeting at his salon in Palais Renaissance, where she was introduced by the St Regis hotel to have her hair done, Mr Gan said in a 2009 blog entry, “She paid me so much that I could buy 2 Birkin bags.” 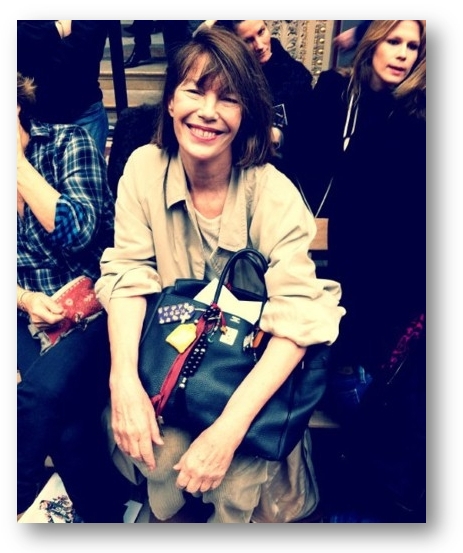 Jane Birkin with her namesake bag. Photo: The Telegraph

The Birkin’s appeal does not lie in how gorgeous it looks. Sure, it’s a handsome bag, but it’s simple and not attention-grabbing. It’s evocative of a time when no bag needs to be ‘It’ to be beautiful and useful. It is a functional receptacle. Yet, first time carriers of the Birkin are surprised by how heavy the bag is, and the strength required in its haulage lies almost entirely in the whole arm. The average weight of a 35cm (a popular size) Birkin in the more commonly used Togo leather is 4.5kg or the equivalent of the mass of a watermelon. Women will complain about carrying home the grocery bag, but they happily carry a laden Birkin!

What’s in a name then? How the Birkin came about is the stuff of legend and corporate spin. By Jane Birkin’s own account, the story is humbler. Still, the crux of the story is rather romantic and myth-worthy. Through the kind intervention of fate, she met a man on a business-class flight (as luck would have it, she was upgraded), and as she was piling her stuff into the overhead bin, the contents of her bag spilled out. The man said to her that she should have bags with pockets. And she replied, “The day Hermès make one with pockets I will have that.” As it turned out, that man was Jean-Louis Dumas, the chief executive of Hermès. And he rejoined, “But I am Hermès and I will put pockets in for you.”

Mr Dumas was a man of his word. When the bag with pockets was made, Ms Birkin went to the Hermès atelier to purchase it. As we see it now, it was an article that could be the world’s first collaboration. Mr Dumas suggested that he accepted no money from her if she would allow her surname to be used in the christening of the bag. We know the reaction to that. Hermès has, however, always underscored that the company annually donates (around £30,000, as reported by the British press) to Ms Birkin’s preferred charities as a form of royalty for the use of the Birkin name.

It really would be interesting to consider the name choice here. Hermès picked Birkin instead of Jane. Would a Jane bag have the same ring or distinction as a Birkin bag? Clearly not. Jane is rather common and often associated with ‘plain’, never mind its link to one of English literature’s best-known writers. Birkin, on the other hand, is exceptional. It’s English, which, to a French company, must have been exotic, and it has impressive lineage. It can be traced to a county in West Yorkshire, as well as to the Birkin Baronetcy, attributed to a businessman Thomas Isaac Birkin, who was in the manufacture of lace, a cloth associated in its early use with royalty and the clergy.

A grand name for a grand bag. But are the owners just as grand, considering the Kardashians? Or Jamie Chua?